Thomas will hand over CEO position to Dr. Markus Steilemann on June 1, 2018, four months ahead of his original planned retirement. 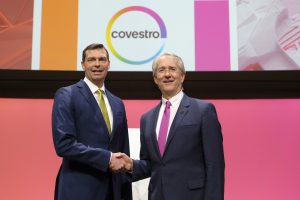 Germany polymer supplier Covestro has speeded up the timetable for the retirement of its CEO Patrick Thomas and his replacement by longtime Covestro executive Dr. Markus Steilemann.

Thomas will step down as CEO effective May 31, 2018, four months ahead of his original retirement date of September 30, 2018.

Thomas had originally informed Covestro’s supervisory board last year that he would not be available for a further term beyond 2018, and had named September 30, 2018 as the date on which he would be stepping down.

In a statement, Covestro called the decision for Thomas to step down early as an “amicable” and mutual one. “We have deep respect for Patrick Thomas’ excellent work at Covestro,” said Dr. Richard Pott, chairman of the supervisory board. “He has significantly contributed to Covestro’s remarkable success story. Ever since Covestro became independent in 2015, the company achieved record results continuing its profitable growth path until today.”

Thomas has been CEO of Covestro and its predecessor Bayer MaterialScience since 2007. Prior to that, he held various positions across the chemicals industry.

Steilemann’s career began at Bayer in 1999. In 2004, he moved to Bayer’s new MaterialScience subgroup, which now operates independently under the name Covestro. From 2008 onwards, Steilemann held various management positions in the polycarbonates segment in Asia, including serving as head of global industrial marketing. Between 2013 and 2015, he headed the entire polycarbonates segment before being appointed to the Covestro board of management.