Built by construction company JD Composites, the 2,000-square-foot, three-bedroom home has opened up a new way of turning plastic waste into eco-friendly housing. 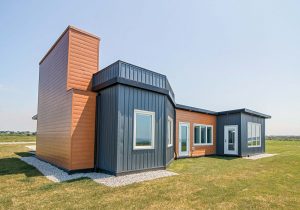 Remember the fable about the three little pigs and the big, bad wolf? The wolf could blow down houses made of straw and wood, but not brick. There’s a new prefab beach house overlooking the Meteghan River on Nova Scotia’s South Shore that the wolf wouldn’t be able to make a dent in either – and made from approximately 620,000 recycled plastic water bottles, it’s a lot more environmentally friendly.

And far from being a bedtime story, it’s history-making.

Built last year by Canadian construction firm JD Composites, the 2,000-square-foot, three-bedroom home is the first-ever made from 100 per cent recycled standard plastic bottles using PET core foam green technology. Incorporating over 184 prefabricated PET wall panels, each individual panel was shaped and cut manually and according to the home’s design. The 15-centimeter-thick plastic slabs provide both structural strength and insulation – the plastic panels will stand up to some of the highest wind speeds that Mother Nature can generate, and also allow the house to maintain inside temperatures more than twice as effectively as conventionally built homes.

JD Composites is a start-up led by company president David Saulnier, a 15-year veteran of the marine construction sector, and vice president Joel German, a licensed heavy machinery operator who holds a degree in business administration from Université SainteAnne in southwest Nova Scotia. The two men were looking for a disruptive technology to bring to market, and hit on the idea of building a home with recycled plastic bottles. Saulnier had experience working with composites, and decided that if he and German were going to start a new business, they had a responsibility to help the environment as well. “We wanted to utilize a plastic waste that might have otherwise ended up in a landfill or – even worse – in the ocean,” Saulnier said. “We chose PET for a number of reasons: it’s a versatile material, relatively inexpensive, and is also one of the plastics that causes the most litter.” And building from other plastics could be problematic, he added. “PVC, for example, will off-gas volatile organic compounds for the duration of its lifetime unless it’s totally encapsulated,” he said. 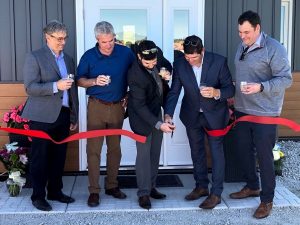 After thinking about the project for three years – and with assistance from a $109,000 repayable loan from the Atlantic Canada Opportunities Agency – JD Composites chose Brampton, Ont.-based foam producer Armacell to supply the PET. “I had known Armacell from my boat building days, and knew they were a very reliable PET supplier,” Saulnier said. The duo worked closely with Armacell’s housing division, which created the panels by melting down the 620,000 recycled plastic bottles into small beads, before placing them through an extensive extruding process, during which the bottles are shredded and heated to form plastic pellets and placed into a hopper, where they were treated with gases that melted them into foam. When cooled, the foam becomes incredibly durable and is both rot and mildew-resistant.

After obtaining raw product from Armacell, JD Composites’ team sandwiched the foam core between fibreglass skins to create the lightweight composite panels at their Meteghan warehouse. Once the panels were complete, the entire house – dubbed the Beach House – was assembled on-site in just two days in June 2019, on 1.46 acres of oceanfront property on nearby family land. The panels were chemically bonded together, helping make the whole structure stronger. The JD Composites team then spent the winter finishing the interior. “All of the exterior walls and the roof – everything that gets hit by the elements – are made from recycled PET,” Saulnier said. “Other companies have some rPET in wall panels – 30 per cent recycled content with 70 per cent new material – but no one else is doing what we are. We’ve been told that only four major companies in the world are using this material, and we’re the only ones using it in this way.”

In addition to utilizing plastic waste, the new material delivers when it comes to making the house warm and safe. The panel walls provide insulation at an estimated rating of R-30 throughout. “Typical Canadian homes use insulation with an R-20 rating, with wooden studs used 16 inches apart,” Saulnier said. “Higher rated insulation values are brought down by each stud – wood creates a thermal break in the insulation, reducing the R-value from R-20 down to R-13. Our home has been ASTM certified for North America/Europe for a continuous R-30 value with no thermal breaks. Because there’s nothing to transmit the cold air from the outside to the inside of the home, it’s over twice as efficient as a traditional house.” Over the life of a mortgage, Saulnier estimated, the homeowner could save up to $80,000 in energy costs. 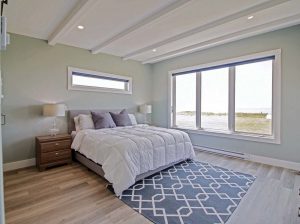 And as for structural strength, Saulnier and German – and everyone else involved in the project – were surprised by the results. Before construction began, a sample panel was sent to Exova Canada, a lab-based testing company in Mississauga, Ont., where it withstood 326-mile-an-hour wind speeds, twice as strong as a Category 5 hurricane. This was with a quarter inch of wind deflection on an eight-foot-by-eight-foot-square panel. “We knew the material was strong, but we didn’t know how strong until the engineers at Exova maxed out their wind chamber,” Saulnier said. “They were also shocked that they could load the panel into the chamber by hand, because it’s such a lightweight material compared to concrete.” Since construction, the house’s strength has been tested again, although that wasn’t part of the plan. “During Hurricane Dorian, which hit Nova Scotia in September 2019, Joel and I went into the house and leaned against some of the walls to see if we could feel anything, and there was no movement at all,” Saulnier said.

Aesthetically, the Beach House doesn’t look anything like other made-from-bottle houses we’ve all seen in photos of shanty towns, either inside or out. JD Composites covered the core foam with an exterior finish of recycled aluminum siding laser-printed with a cedar print for looks, topped off with paint for UV protection. “We chose the siding to make the house stand out, but that’s only one possibility,” Saulnier said. “We could have made it look like a stucco finish and given it a rougher texture.” The interior of the home features a large modern kitchen, open living room, three large bedrooms, two bathrooms, indoor BBQ room, and rooftop terrace. “The terrace gives a great view of St. Mary’s Bay,” Saulnier said. “It’s my favourite feature.” The Beach House also has large windows throughout, which capture other beautiful bay views while also letting in an abundance of natural light. And while the house cost about $400,000 to erect, it’s expected to have fewer issues down the road because the material is so durable. That could appeal to some home buyers who are already spending around $400,000 for new construction, Saulnier said. 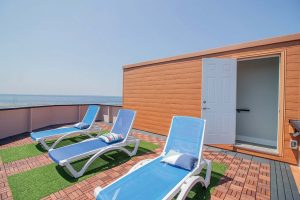 Having garnered both praise and media attention from around the world, the house has put JD Composites on the metaphorical map. “We’ve received comments and questions about the house from all across Canada, the U.S., Britain, and Europe,” Saulnier said. The next step is to get on the map literally. “We’re currently building a similar house about half an hour away for private sale to a client, and our ultimate goal is to further develop the technology so it can be licensed globally. We see it as a solution for housing in hurricane-prone regions and for disaster relief. The scalability of our operation is phenomenal.” The Beach House, meanwhile, is currently for sale and also listed on Airbnb, where it’s become a hot vacation rental property. “If the house doesn’t sell, that’s fine,” Saulnier said. “It’s a Cadillac house in a small Acadian village in Nova Scotia, and we’ve grown attached to it.”

And that’s no fairy tale.