Located near Barrie, Ont., this full-service engineering, product development, and injection molding specialist produces over 70 million high-precision plastic parts each year. And you could probably count the rejects on the fingers of one hand. 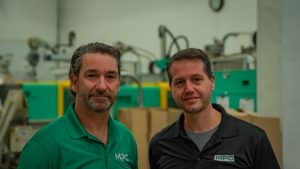 The quest for perfection is probably as old as humankind, and is almost never attained. Romanian gymnast Nadia Comaneci famously got a perfect score of 10.0 at the 1976 Olympic Games, and math whizzes might ace high school tests from time to time, but other examples are few and far between.

But while the pursuit of perfection might seem like a fool’s errand to the average person – akin to chasing a carrot on a stick that’s been duct-taped to your forehead – to Molded Precision Components (MPC) it’s all in a day’s work. Utilizing a team of multidisciplinary engineers and in-house resources, MPC is a full-service injection molding specialist located in rural Oro-Medonte, Ont. – about 15 km north of Barrie – that boasts beyond world-class quality stats with a defective parts rating of less than one part per million delivered from an annual total of over 70 million parts. The company specializes in scientific molding and manufacturing high-precision functional plastic components – including gears, bearings, cable end fittings, multicomponent housings, covers, and seals, made through overmolding and insert molding, multimaterial molding, and micromolding for parts as small as 0.3 grams.

MPC serves multiple industries but focuses primarily on the automotive and medical parts sectors, and was one of the first organizations in Canada to adopt and be certified to IATF 16949 (ISO), which puts it at the head of the list for automotive clients who increasingly require this qualification. As a prerequisite to the IATF certification, MPC also carries ISO 9001: 2008 certification, and ships products throughout Canada, and to the U.S., Mexico, China, Brazil, Poland, and more.

But such wide ranging, high-caliber work hasn’t always been the company’s calling card. Originally founded in 1980 under the name Molded Plastic Consultants, the firm was run for the next 25 years as a simple prototype molding shop with just a few machines. The reinvention began in 2006, when young, experienced plastics industry veterans David Yeaman and Thomas Woegerer purchased MPC’s assets with the goal of turning it into a multidisciplinary engineering, toolmaking, product development, and precision injection molding service. Both qualified professional engineers, the two men wanted to create the type of company they hadn’t been able to find previously. “We had both found it frustrating working for others, knowing there’s a better way of doing things and not being able to do it,” said Yeaman, MPC’s president and co-owner. “We wanted the flexibility to make decisions we couldn’t have made at a larger organization, because you couldn’t prove through an appropriation request or ROI that doing it really pays for itself.” 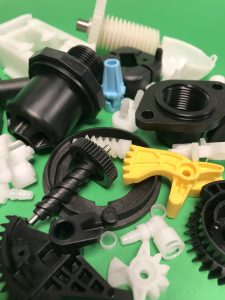 And although the timing turned out to be a bit off, the idea definitely wasn’t. “We started with three people – unfortunately right before the recession hit – but still managed to double our workforce during the recession,” Yeaman said. “We succeeded because we were filling a niche market in precision plastics, implementing lights-out manufacturing from day one and using highly efficient methods to offer customers quality and delivery levels that no one else was achieving.” MPC’s success under its new ownership can be tracked in several ways. First is its dramatic physical growth: from 8,000 square feet of manufacturing space in a single plant in 2006 to 26,000 square feet between two co-located facilities today. “We’ve added a new hall every year for the past five years,” Yeaman said. Second, MPC’s revenues have soared, from $300,000 in 2006 to approximately $10,800,000 in 2018. And third, the company’s workforce has now swelled from the original three to almost 60.

MPC’s growing association with precision molding was made official, so to speak, in March 2019, with a name change and rebranding that was kicked off with an invitation-only event at the Five Points Theatre in downtown Barrie. “We relaunched the company as Molded Precision Components to reflect the fact that we are very precise in our work, so much so that incorporating it into our name made sense,” Yeaman said. “Now the market knows exactly what we do.”

MPC has invested heavily over the years to become a full-service shop. “We have extensive tooling capabilities, including 15 tool makers; CAD design and 3D printing for validation of product design and development; in-house SigmaSoft virtual molding software; optical scanning that can measure to five microns or less; and our own vertically integrated automation and part packaging by cavity,” Yeaman said. In essence, MPC was running a connected plant long before being connected was a thing. “We adopted a smart factory approach before anyone knew what Industry 4.0 was,” Yeaman said. “In the early days, we implemented RJG Co.’s in-cavity pressure sensing technology in every cavity and every tool; that way, we knew if a part was good or not before the mold even opened. By adding sensing and automation to everything possible, we can predict the behaviour of the plant as a working organism. Our goal has always been to measure the process and control it completely, automatically, and with minimal human involvement.” 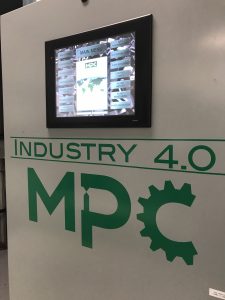 File that comment about “minimal human involvement,” because it explains a lot about MPC. One of the company’s key goals under its new ownership was to become lights-out – not simply to save money but also as a way of achieving a perfect manufacturing process. “Our belief is that having workers on shift 24/7 can actually mask problems,” Yeaman said. “Because a person overseeing production will step in to correct a failure in the line, you’ll never strive to make that production line run perfectly on its own. Running lights-out forces us to reach for perfection in our product runs. Our mentality is perfection in everything we do. Good enough isn’t good enough – we expect more of ourselves and so do our customers, especially in the automotive and medical markets, where there’s no tolerance for rejects.”

The key to getting the biggest benefits from connected technology, Yeaman and Woegerer believe, is to install it plant-wide – which MPC has done, machine by machine. “We built the company by investing in one connected machine at a time, until eventually all of our units were connected and able to run lights-out, so we never had to go back and redo or retrofit anything,” Yeaman said. “It was a big investment, but smart technology works best when it’s plant-wide; you can’t limit it to a single manufacturing cell and expect to get full payback.”

And it’s an investment that never truly ends. MPC continues to add new technology to its arsenal, including the recent acquisition – for a cool quarter of a million dollars – of an ATOS optical precision coordinate measuring system. Made by technology supplier GOM, the ATOS allows 3D, non-contact measurements of complete surfaces of prototypes, tools, and injection molded parts regardless of the object’s size; the advanced blue light technology captures complex freeform contours quickly and completely, overlaying that data directly in the design environment. “This is an incredible piece of equipment that improves the accuracy of parts more quickly to deliver reduced time to market for time-sensitive projects,” Yeaman said.

MPC’s total commitment to perfection manifests itself in other ways too. Take water chilling, for example. “We wanted to have a cooling system that was as environmentally responsible as possible, so we eliminated towers and chillers and adopted geothermal technology early on,” Yeaman said. “Thomas and I designed and developed our own geothermal cooling system; it allows us to recapture the heat that we put into the machines and reuse it to heat our offices. It was a significantly larger financial investment than buying a chiller would have been, but we wanted to put our money where our mouths were when it came to the environment.”

And the company has the same level of commitment when it comes to scouting young new talent. “Compared to other molders, we have a relatively young workforce, and cultivate candidates from the universities and colleges, specifically Georgian College, which is local,” Yeaman said. “We work closely with Georgian College’s Co-operative Education program, and hire many of its students over the summers for wide-ranging roles – engineering, project management, moldmaking, quality management, accounting, logistics, and more – and a lot of them have taken full-time jobs with us after graduation.” MPC’s commitment to attracting the best young employees doesn’t end there.

The company is also an active participant of the Barrie Innovators Alliance; a sponsor of The Sandbox, a gathering place in Barrie where budding entrepreneurs can meet and network about starting new businesses; and a lead sponsor of the CyberGnomes, a team of Stayner, Ont. high school students who complete annually in the “First Robotics League” competition. And in 2018 MPC launched Tabacon, a venture developed to provide youth with the opportunity to learn and gain practical, transferable skills such as leadership and social abilities through outdoor adventures and mentorship experiences. 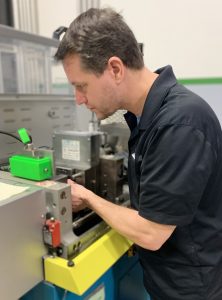 At the core of its business operations is MPC’s people, and Yeaman and Woegerer consider them – and not the company’s enviably low defective parts rating – to be its biggest advantage. “Our quality and reliability are second to none, but we couldn’t do any of this without our people,” Yeaman said. “Anyone can buy and implement a new technology, but implementing a culture of kindness and compassion – doing what’s right for your fellow co-workers – is more difficult. We have some of the best people in the industry here, and we want them to be in the right positions – whether they’re quality inspectors, engineers, tool makers, or machine operators – so that they all add equal value and everyone knows their opinion matters. And I think we’ve done that.”

The flip side of that equation is the work given back by MPC’s employees – not just supporting the business, but through employee-led teams such as MPC Cares, which raises funds to support local causes; and the MPC Green Team, which implements sustainable working and operation practices across the business and beyond.

Heading into a new decade, MPC’s plans will get even bigger. The company will break ground shortly on the construction of approximately 20,000 square feet of extended space at the second of its two co-located sites. This will provide floorspace for an estimated 15 to 20 new hires; for the relocation of MPC’s in-house tool building and engineering capabilities; and for the next generation of molding technology, with the first machine starting up in October 2020. And beyond that, MPC has just secured a new 10-acre property for the development of a 150,000-square-foot state-of-the-art facility, with the objective of achieving net zero energy operation. “There’s never a dull moment at MPC, and 2020 is just the beginning of our next chapter,” Yeaman said.

Sounds like the plan to attain perfection is unfolding perfectly.