Drawing on Canadian research, the companies are giving vehicles a caffeine boost by using coffee chaff in vehicle parts such as headlamp housings. 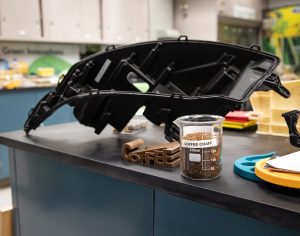 In the old adage about separating the wheat from the chaff, the chaff represents the stuff that’s worthless. But in light of a new partnership between the Ford Motor Co. and McDonald’s USA – based on Canadian research – it may be time to rethink that.

Every year, McDonald’s produces more than 62 million pounds of coffee chaff – the unused dried skin that comes off of coffee beans during the roasting process – that has traditionally gone straight to landfills. Now, however, in what you might call a double shot of innovation, Ford is taking that chaff from McDonald’s and turning it into car parts.

The companies found that chaff can be converted into a durable material to reinforce certain vehicle parts, including some of the most demanding ones, like headlights and car battery covers. By heating the chaff to high temperatures under low oxygen, mixing it with plastic and other additives and turning it into pellets, the material can be formed into various shapes that not only meet the quality specifications for headlamp housings and other interior and under hood components, but that will also be about 20 per cent lighter and require up to 25 per cent less energy during the molding process than the previous material combination of plastic and talc, a mineral that has to be mined.

The idea was originated, tested, and patented in Ontario, by researchers at the University of Guelph’s Bioproducts Discovery and Development Centre, who were looking for organic alternatives for polymers used in plastics and hit on coffee chaff as one of the most useful and scalable materials.

As used by Ford and McDonald’s, the process begins in South America, where the beans are collected and shipped to the roasters, where the skin comes off. It then moves to Ontario, when the chaff is shipped to Competitive Green Technologies, a biotechnology company in the town of Leamington and a technology licence partner with the University of Guelph; this is where the coffee chaff and plastic are mixed to produce resin. The headlight housings are then injection molded by Varroc Lighting Systems, which is based in Plymouth, Mich., near Ford’s headquarters in Dearborn. The final step is to ship the headlights to Ford, where they get added to the cars.

The automaker began installing the headlights in its Lincoln Continental in Dec. 2019, and other model cars are expected to follow, including the Mustang.

McDonald’s plans to donate “a significant portion” of its North American coffee chaff to the cause – which is good, because Ford is progressing toward a goal of using recycled and renewable plastics in vehicles globally, with an increasing range of sustainable materials.

“McDonald’s commitment to innovation was impressive to us and matched our own forward-thinking vision and action for sustainability,” said Debbie Mielewski, senior technical leader of Ford’s sustainability and emerging materials research team. “This has been a priority for Ford for over 20 years, and this is an example of jump-starting the closed-loop economy, where different industries work together and exchange materials that otherwise would be side or waste products.”