Suit inspired by Batman could protect wearers from coronavirus

Beijing design firm Penda has invented a shield-like suit with advanced coronavirus-fighting capabilities that it says can protect wearers from the potentially deadly virus. 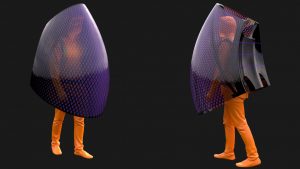 Two views of the Be a Bat Man suit. Image Credit: Penda

If you ever dreamed about being a superhero as a kid – or even as an adult – you just might be able to get your wish shortly, thanks to a Chinese architectural firm looking for a way to prevent infection from the spreading coronavirus.

Beijing-based design firm Penda has designed a shield-like suit that it claims has advanced coronavirus-fighting capabilities that can protect wearers from the potentially deadly virus.

Called “Be a Bat Man,” the wearable device was inspired by the Batman costume; structured like the wings of a sleeping bat, it protects by the wearer by isolating them and sterilizing their surroundings with ultra-violet technology.

“The ultraviolet radiation network on the surface of the device can heat up to sterilize the surrounding environment, turning contact a way to kill, rather than spread, the virus,” Penda co-founder Sun Dayong, who led the project, wrote on the firm’s Instagram account. “The design follows the bionic design principle, taking bats as the prototype.”

And taking a page from another superhero – Barry Allen, aka The Flash, who kept his superhero costume hidden in a ring worn on his finger – the suit can be folded up and kept in a backpack, making it ready to be deployed at a moment’s notice.

The suit’s shield would be made of PVC film stretched like the membranes of a bat’s wing between carbon-fibre supports, Dayong told Dezeen, an online media outlet that reports on architecture and design. Embedded wires would generate enough heat to kill pathogens on the device surface and maintain a sterile environment within the shield, Dayong said.

“The coronavirus will be killed by temperatures of 56°C,” Dayong told Dezeen. “The PVC film cover is like our car windshields – there are heater wires in between the glass to [melt] the ice and snow in the winter.”

Penda is currently looking for a financial backer to help turn the suit concept into reality, and Dayong is willing to offer his services as a designer free of charge for this.

And after the coronavirus epidemic is over, Dayong told Dezeen, he hopes to be able to find a market for the Be a Bat Man suit by upgrading the shields with Google Glass technology, or simply be using the suit as a “unique private mobile space for people”.