By preventing polymer degradation, light stabilizers from BASF are extending the service lifespan of geotextiles used as the country ramps up its road construction. 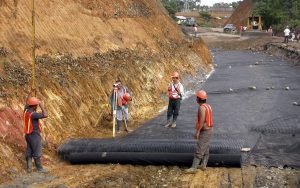 Ever since large-scale automobile production kicked off in the early 20th century, highways have given  millions of people the opportunity for carefree travel.

But there’s nothing carefree about making them.

One of the most important issues in highway construction is maintaining the separation between layers of different sized soil particles – restricting the flow of water and finer soil particles into the gravel is crucial to preserving the strength and integrity of the asphalt. Which is where geotextile materials come in. Commonly used to improve soils over which roads, embankments, pipelines, and earth-retaining structures are built, there are several types of geotextile material, including open-mesh, warp-knitted, and closed fabric or non-woven textiles. When used in highway construction, they make poor soil more manageable, enabling it to be paved over. They also help protect the pavement against weather erosion damage.

Such geotextile membranes are usually made of high-density polyethylene (HDPE). To make these, HDPE material is spun into fine filaments and then bonded by heat without using a binder. Usually, the light stabilizer package will include a process stabilizer to protect the polymer during extrusion, as well as a UV stabilizer and a thermal stabilizer to protect it from heat and light degradation.

The global demand for geomembrane materials is expected to increase dramatically over the next few years. Many of the greatest developments in this field will take place in India due to large-scale infrastructure projects that are currently in the pipeline. The World Bank has even made the use of geotextiles/geomembranes mandatory in all infrastructural projects funded by it.

In one of the most recent developments in this area, light stabilizers from BASF’s Chimassorb range are now being used by Megaplast India Pvt. Ltd., a leading polyethylene products manufacturer in India, to produce nonwoven geotextile used in the construction of national highways in that country. According to BASF, the additive package used plays a crucial role in stabilizing the production process and extending the service lifespan of the geotextiles.

BASF not only provided Megaplast with the suitable light stabilizer package, Althoff said, but also helped them interpret the technical data results. During the testing period, BASF assisted the customer with the trial of various formulations, which gave them the option to choose the optimal balance between cost and performance.