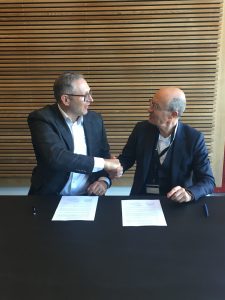 Sepro’s Visual control platform was developed especially for robots used in plastics injection molding machines. All Sepro products, including co-branded lines, are controlled by Visual, providing the same user interface regardless of the type of robot.

The partnership will now allow Sepro to deliver the Visual system to Cartesian robots, six-axis articulated-arm robots, and now cobots. Like the six-axis robots, cobots are adapted to peripheral operations that are increasingly in demand in the plastics industry, Sepro said in a statement.

Under the terms of the agreement, Sepro will provide global service for solutions from Sepro and UR. With more than 150 experts and 42 service centers around the world, Sepro will be able to deliver local support and the same quality of service on cobots as it does on Cartesian and six-axis robots.

“This will allow customers to design safe, open configurations for various types of processes, including peripheral operations or advanced automation cells,” Sepro said in a statement. “The new solutions from Sepro and UR ensure shortened process-development times and faster installation, resulting in easy-to-deploy, easy-to-test post-processing operations and turn-key automation systems.”

“I am enthusiastic to announce this partnership, which will expand our already extensive portfolio,” Sepro Group president and CEO Jean-Michel Renaudeau said in the statement. “Moreover, I believe that the combination of Sepro Group’s know-how and the ground-breaking collaborative technologies developed by Universal Robots will allow our customers even greater flexibility and choice in how they approach automation in the plastic injection process.”

UR is headquartered in Odense, Denmark; its North American division, Universal Robots USA Inc., is based out of Boston.