The Germany-based Injection molding machine maker has named Frédéric Vandecandelaere as the new managing director of its French subsidiary Arburg SAS, which is its oldest international subsidiary. 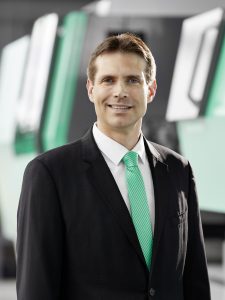 Arburg SAS, based in Aulnay-sous-Bois near Paris, was founded 1985, making it the first international subsidiary of Germany-based Arburg.

In a statement, Arburg said that Vandecandelaere has a degree in economics and additionally completed a Master of International Business at the Ecole de Management in Strasbourg. “In his previous positions, Frédéric…gained many years of experience in mechanical engineering and plastics processing, for example as head of the French sales subsidiary of a thermoplastic component manufacturer,” Arburg said.

Headquartered in Lossburg, Germany, Arburg has 33 locations in 25 countries, with a total of approximately 3,000 employees worldwide. Its North American headquarters is located in Rocky Hill, Conn.