Processing equipment maker Wittmann Battenfeld has finalized a deal to supply more than 100 injection molding machines to Hong Kong-based Hayco Manufacturing Ltd. for that company’s new manufacturing plant in the Dominican Republic and for an expansion of its three existing factories in China. 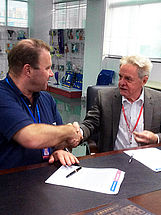 In a statement, Vienna, Austria-based Wittmann Group said that Hayco plans to purchase the company’s SmartPower servo-hydraulic and MacroPower large tonnage injection machines, along with auxiliary equipment, over the next 5 to 10 years.

The framework agreement was signed on November 4, 2015. The value of the contract has not been disclosed.

Hayco is a leading manufacturer of modern household products and appliances. The company has been manufacturing in China for over 30 years, and its three plants in Shenzhen total more than 1.5 million square feet.

In August, 2015, Hayco announced that it would invest over US$50 million for a new injection molding and assembly plant in the Dominican Republic to expand its global footprint and improve deliveries to North Americana and Europe. The Dominican Republic facility is scheduled to begin production next year.