Wittmann Battenfeld USA is undertaking a large-scale expansion of its headquarters in Torrington, Conn.

On October 5, the processing and auxiliary equipment maker purchased the adjacent building to its existing headquarters in Torrington. Construction will begin immediately, with a plan to move in by February 2016.

The new building, “Plant II”, is a 50,000 square foot facility that will be occupied entirely by Wittmann Battenfeld’s material handling and auxiliaries division, headed by divisional manager Michael Stark. Of the 50,000 square feet, 7,000 is dedicated to offices for sales, engineering, and service, while the remaining 43,000 will be used for production and warehouse space for the division and for occasions when “Plant 1” requires additional staged storage space.

“This expansion will help facilitate what has been rapid growth in our material handling and auxiliaries division,” Stark said. “In particular, we have a pressing need to consolidate our growing inventory, which has been housed both in-house and at offsite locations; and we also need increased space for our injection molding division to house additional operating workcells for both demonstration and customer run-offs.” 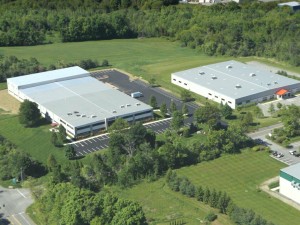 “Plant I”, building on left, is the original headquarters building. The new building, “Plant II”, is on the right with more land for future expansions.

As an offshoot of the expansion, Wittmann Battenfeld’s current headquarters building, which was recently expanded to 90,000 square feet in 2014, will be getting its own renovations. New machinery and equipment will be added and the company will incorporate some new steady production flow processes to better streamline operations, which will help shorten lead times and keep up with increased demand.

When the expansion is complete, the Torrington site will have approximately 150,000 square feet of office and manufacturing space in total.