The 115,000-square-foot plant in San Antonio was completed on February 26, and operation started this month. Nissei plans to hold an official opening ceremony in May. 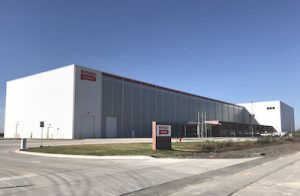 The 115,000-square-foot plant in San Antonio, Texas, is Nissei’s third production site outside of Japan.

The 115,000-square-foot plant was completed on February 26, and operation started this month. Nissei plans to hold an official opening ceremony in May.

“High-quality Japanese injection machines are widely used on the shop floors throughout the world,” Nissei said in a statement. “One of the management goals is to produce and supply ideal machines to each market from the nearest production base.”

Nissei established the fully-owned Nissei Plastic Machinery America Inc. subsidiary in San Antonio in 2016 in order to achieve its goal of producing injection molding machines locally in the US. The construction of the factory and associated facilities started in December 2016.

Large hybrid machines, which Nissei said have been “continuously in high demand” in the North American market, will be produced in the new factory, with clamping forces ranging from 560 to 1,300 tons.

The San Antonio plant is Nissei’s third production facility outside its headquarters in Japan, after the Taicang subsidiary in China and the Rayong subsidiary in Thailand.