For the first time in its history, the Canadian auto parts supplier will supply seats to the BMW Group. 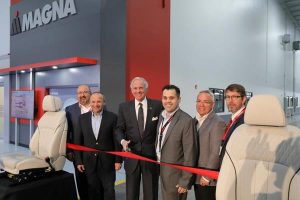 For the first time in its history, Canadian automotive parts supplier Magna International Inc. will supply seats to the BMW Group.

“Magna International is a longtime member of the South Carolina business community, and we’re proud to see that this global company is continuing to find success here,” said South Carolina Governor Henry McMaster. “I look forward to watching all that this plant will achieve in the years to come.”

At the event, Magna officials also announced an expansion at the plant, which will add 25,000 square feet and an additional 130 jobs. In total, Magna is now creating 610 jobs at the 255,000-square-foot facility, where construction for the expansion is under way.

“Today represents an exciting step forward in the growth and development of our business in North America,” said Burge Young, vice president of operations for Magna Seating. “We have a strong leadership team and a highly skilled workforce which is dedicated to world-class manufacturing and has a clear mission: to be the premier seat supplier to our customers here in South Carolina and around the world.”

Headquartered in Aurora, Ont., Magna has three other manufacturing locations and employs approximately 1,450 people in South Carolina. The new seating facility is Magna’s fourth location in the state.