The footprint of the plant in Kunshan City, Jiangsu, China will nearly double, Milacron said. 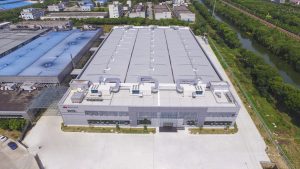 An aerial view of the expanded Mold-Masters facility.

Milacron, which owns the Mold-Masters hot runners brand, said the expansion is designed to meet particularly strong growth in the large Chinese and other Asian regions plastics market.

“Our hot runner operations in China have seen year over year growth every year since its inception in 2005,” Milacron CEO Tom Goeke said. “This significant increase in our hot runner manufacturing footprint will allow us to better serve our customers in Asia and the world by adding both manufacturing capacity and engineering know-how to our operations.”

The expansions were completed on June 25 and the initial installation of new machinery is underway. The expanded footprint allows for the addition of 30 new machining centres, to be followed by another 22 in the fall of 2017, Milacron said. “The increased capacity and capabilities will also allow for manufacturing operations, typically done by suppliers, to be brought in-house, allowing for tighter quality and delivery control.”

Milacron’s Mold-Masters China operations employs approximately 800 workers – a number that Milacron expects to reach 900 by the end of 2017. Milacron’s product brands including Milacron injection and extrusion machines, Uniloy blow molding, DME mold components and CIMCOOL fluids have 11 locations in China as well as offices in Japan, Korea, Singapore, and India.