The “25 years of Arburg in China” celebrations kicked off at an evening event in Shanghai on July 7 with around 200 invited guests, a delegation from the Arburg parent company in Lossburg, Germany, and employees from China. Managing partner Renate Keinath presented the anniversary sculpture to Zhao Tong, managing director of the Arburg organisations in China. Other highlights were video messages from senior partner Eugen Hehl, employees of the parent company, and numerous customers.

Arburg’s first subsidiary in China was founded in 1992 in Hong Kong; two other subsidiaries followed: the first in Shanghai in 2004 and then in Shenzhen in 2006. 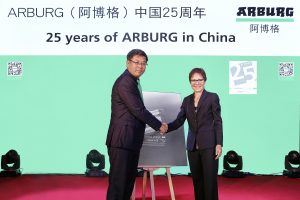 “In the early years in China, our customers tended primarily to be large, globally operating companies,” managing director of sales Gerhard Böhm said during the ceremony. “This has changed significantly in the interim and we are now pleased to say that more and more domestic injection molding companies are benefiting from the advantages of our high-performance machines. They not only appreciate the performance of our high-tech Allrounder machines, but also our extensive expertise in service and consulting.”

Following the event in Shanghai, “25 years of Arburg in China” will also be celebrated on September 22 at the Shenzhen location together with customers from that region.