Smith has been with extrusion machinery maker Davis-Standard for 47 years, most recently as process manager, web handling and specialty winding. 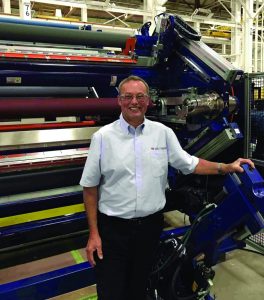 Smith, who has been with extrusion machinery maker Davis-Standard LLC for 47 years, recently announced he’ll be transitioning into a part-time role from his current position of process manager, web handling and specialty winding at the Pawcatuck, Conn.-based company.

Even with a reduced schedule, however, Smith will continue to support Davis-Standard’s technical leadership, deliver technical presentations, and training classes, and continue his consulting work on web handling and winding.

“I find great joy in making new discoveries and sharing knowledge,” Smith said. “I’m passionate about our industry and grateful for the opportunities I’ve had to work with so many outstanding colleagues and peers over the years. Even though I’m pulling back into semi-retirement, I look forward to continued collaboration in advancing web handling and winding techniques to improve processes.”

Smith is well known throughout the film and nonwoven industries for his technical knowledge, leadership and involvement in TAPPI (Technical Association of the Pulp and Paper Industry). He has two winding patents, over 85 technical presentations, numerous published articles, and two books published through TAPPI Press. His second book is the Ultimate Roll and Web Defect Trouble Shooting Guide. He has received two TAPPI technical awards, including the coveted Rohm & Haas Prize and has been named a TAPPI Fellow by the TAPPI board of directors for his technical and service contributions to the industry. Smith has also been honored by the Society of Plastic Engineers (SPE) awarding him the SPE Certificate of Recognition for significant contributions made to the Society and the plastic industry at large.

“Duane Smith is an enthusiastic and motivated innovator who has worked tirelessly to advance web handling and winding best practices worldwide,” said Davis-Standard president and CEO Jim Murphy. “We congratulate him on going part-time and are grateful to continue to have him as resource in the years to come. We know his work is far from finished.”