The $60-million Planta Nueva Ecología de Tabasco project will have the capacity to process 50,000 tonnes of post-consumer PET bottles per year. 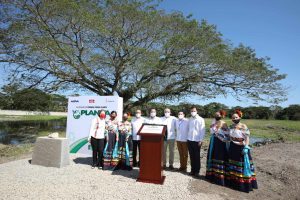 The ceremony to lay the first stone of the new PLANETA recycling plant. Photo Credit: Alpla

Austria-based packaging supplier Alpla and Coca-Cola FEMSA, said to be the largest bottler of Coca-Cola products in the world, are partnering in a joint venture to build a new PET recycling plant in Southeast Mexico.

The US$60-million recycling plant Planta Nueva Ecología de Tabasco – better known as PLANETA – will have the capacity to process 50,000 tonnes of post-consumer PET bottles per year, Alpla officials said in a Jan. 26 news release, which will result in 35,000 tonnes of recycled PET material ready for reuse.

Alpla said the location of the new facility is “in the region with the greatest potential for solid waste recycling…that will integrate 18 collection centres throughout south and Southeast Mexico.”

“The big challenge today is the handling of the materials after the consumption phase,” Alpla CEO Philipp Lehner said. “We are currently investing worldwide in systems to give plastic packaging a value – because then it is collected and recycled. With strong partners like Coca-Cola FEMSA at our side, we will be able to set up the necessary infrastructure and close the bottle cycle in as many regions as possible.”

Alpla has had a presence in Mexico since 2005, when Alpla Mexico, Coca-Cola Mexico and Coca-Cola FEMSA opened Industria Mexicana de Reciclaje (IMER), said to be the first food-grade PET recycling plant in Latin America. The IMER facility has a production capacity of 15,000 tonnes of flakes from post-consumer PET per year. “Since its foundation, it has processed more than 140,000 tonnes of this material, which has been returned to the production cycle of new bottles,” Alpla said.