The new facility in Toluca will double its HDPE recycling capacity in 2022. 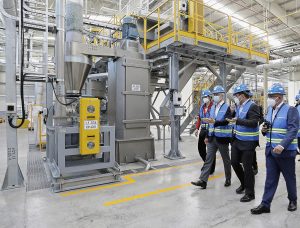 Austrian packaging supplier and recycler Alpla Group has opened a 20-million-euro (US$30 million) HDPE recycling plant in Toluca, central Mexico, on Nov. 10; and has also announced it will double the facility’s capacity to 30 million tonnes a year by the second half of 2022.

Around 70 new jobs have been created at the plant, which will be run as a wholly owned subsidiary of Alpla.

The facility is currently designed for an annual capacity of 15,000 tonnes of recycled HDPE (rHDPE) in pellet form. This regranulate is mainly used for the production of non-food packaging such as personal care products and household cleaning agents. “The demand for recycling material is so high in Mexico and Central America that the majority of the output will be used regionally,” Alpla officials said in a news release.

“We are seeing increasing momentum in the recycling market…and the demand from our customers in the region for post-consumer recycled materials is rising,” Carlos Torres, Alpla’s manager for Mexico, Central America and the Caribbean, said the news release.

Alpla announced that it would build the plant in Toluca, which is the capital of Mexico’s central State of Mexico, in September 2020.

Alpla officials say their company has “many years of experience” in recycling post-consumer PET in Mexico. The first bottle-to-bottle recycling plant in Latin America, Industria Mexicana de Reciclaje (IMER), went into operation back in 2005. IMER is a joint venture between Alpla México, Coca-Cola México, and Coca-Cola Femsa. “By joining forces, the partners have established the infrastructure for collecting and recycling used PET beverage bottles over the past 15 years,” Alpla said. “They produce close to 15,000 tonnes of food-grade flakes from post-consumer PET a year.”