The halfway point was observed at a topping-out ceremony for the new Hall 1 held on Sept. 14. Both Hall 1 and 2 are being demolished and will be replaced by a larger Hall.

An ambitious construction project on the exhibition centre where Germany’s triennial K plastics trade show is held has now reached the halfway point.

The halfway point was observed at a topping-out ceremony for the new Hall 1 held on Sept. 14. The traditional topping-out speech was given by the construction managers, Thomas Schulte and Holger Meyer from Osnabrücker Köster GmbH.

Messe Düsseldorf, the Germany-based organization that operates the K show, approved plans for the complete reconstruction of the exhibition centre’s South Entrance, including its Hall 1 building, shortly after K2016. The work started in May 2017 and is scheduled to be completed by summer 2019, in time for the staging of K 2019 in October of that year. The total investment for the project will be 140 million euros. 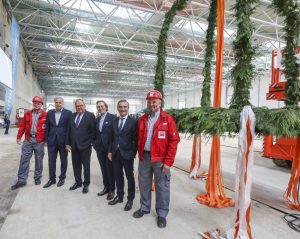 The topping-out ceremony for the new Hall 1 held on Sept. 14.

Both Hall 1 and 2 are being demolished and will be replaced by a new Hall 1 measuring 158 meters in length, 77 meters in width, and comprising more than 12,000 square meters in total, roughly the size of the Halls 8a and 8b. The focal point of the new hall will be a new illuminated and translucent canopy, 7,800 square meters in size and about 20 meters high.

“The building complex will increase the international attractiveness of Messe Düsseldorf even further and will strengthen its function as a meeting point for a wide range of industries,” Werner M. Dornscheidt, president and CEO of Messe Düsseldorf, said at the ceremony.

The new building will also give the City of Düsseldorf an additional architectural highlight, Dornscheidt added, by becoming “the new face” of the exhibition centre towards the city and also the northern endpoint of the city’s silhouette from the river Rhine.

The building project also includes a major facelift for the Congress Center Düsseldorf (CCD), which is directly connected with Hall 1, and its audience capacity will be boosted to 16,000 persons.