For the fifth consecutive quarter, plastics machinery shipments in North America continued to increase in the second quarter of 2018, according to the statistics compiled and reported by the Plastics Industry Association’s Committee on Equipment Statistics.

For the fifth consecutive quarter, plastics machinery shipments in North America continued to increase in the second quarter of 2018, according to the statistics compiled and reported by the Plastics Industry Association’s (PLASTICS) Committee on Equipment Statistics (CES).

The preliminary estimate of shipments of primary plastics equipment (i.e. injection molding and extrusion machines) for reporting companies totaled US$335.2 million in the second quarter of 2018. This was a moderate increase of 1.6 per cent from the US$329.8 million revised figure in the previous quarter, but a 5.9 per cent increase from Q2 of 2017. 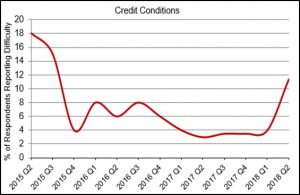 After a strong first quarter year-over-year (Y/Y) in 2018 shipments, Q2 moderated on a quarterly basis, CES said. “Plastics machinery shipments seemed to have hit a speed bump in the second quarter, but there’s no indication that shipments for the remainder of the year are trending down,” said Perc Pineda, chief economist at Washington, D.C.-based PLASTICS. “U.S. economic fundamentals remain strong. As the economy fast approaches – if it hasn’t already attained – full capacity, businesses will have to cope with tighter resources, particularly labor, and output increases will not be as robust as in previous periods.”

In the CES members second quarter survey, the percentage of respondents who reported that their customers were having difficulty obtaining financing for new equipment increased to 11.4 per cent: a 7.4 per cent increase from the first quarter, which is in sync with rising interest rates as U.S. monetary policy continues its gradual tightening. However, the remaining majority of respondents – 88.6 per cent – reported no customer financing difficulty in the second quarter, which suggests financing rates were not cost prohibitive and financing for new plastics equipment remains largely accessible.