The 50,000-square-foot facility will serve the Montreal-based company's customers in Western Canada and parts of the U.S. 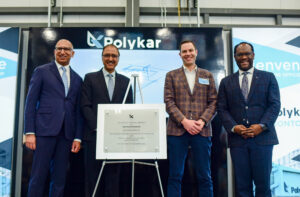 Montreal-based flexible packaging maker Polykar Inc. has officially opened a new 50,000-square-foot plant in Edmonton, marking the completion of a construction process that began in July, 2021.

The plant, located in the city’s Discovery Business Park, is intended to serve Polykar customers in Western Canada and parts of the U.S., Polykar officials said.

Flanked at the ceremony by Amarjeet Sohi, Mayor of Edmonton, and Deputy Premier Kaycee Madu, Polykar president and CEO Amir Karim called the plant’s opening a “watershed moment” for the company. “This puts Edmonton squarely at the forefront in terms of creating value-added products from the raw materials made in Alberta,” Karim said. “It includes a cutting-edge recycling facility, positioning the company to actively participate in Alberta’s efforts to divert plastic waste from landfills. It has also created 50 new jobs, a number we expect to grow to 70 within the next two years.” 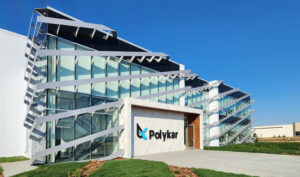 The exterior of the new plant. Photo Credit: Polykar Inc.

Production has recently begun in the new plant, which will house a centre of excellence for the development and commercialization of flexible and compostable packaging. Polykar officials describe the new plant, which has state-of-the-art robotics and automation, as “one of the most modern and innovative of its type in North America.”

Polykar officials also announced that the company has purchased an additional 1.5 acres of land just north of the plant. “[This] underscores [our] confidence in Edmonton as a key contributor to our future growth plans,” they said.