The facility is phase one of a $40-million investment to create a centre of excellence to develop and commercialize flexible and compostable packaging. 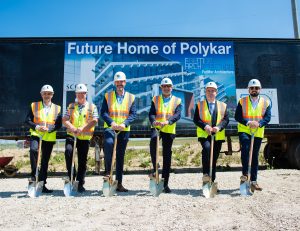 In the first phase of a $40-million investment aimed at better servicing its Western customers, Quebec-based flexible packaging supplier Polykar Inc. has officially broken ground on a new 50,000-square-foot state-of-the-art plant in Edmonton.

The plant – which is expected to be fully operational by the spring of 2022 and employ about 70 employees within the first two years – is being built in the Discovery Business Park industrial subdivision in South Edmonton.

According to Polykar officials, the construction of the facility is the first step in its multimillion-dollar investment to create a centre of excellence for the development and commercialization of flexible and compostable packaging.

“We selected Edmonton and Alberta as the ideal location for our second Canadian plant for its dynamism, its openness to the manufacturing sector, and most importantly, because of its highly qualified, skilled and diverse labour force,” Polykar president and CEO Amir Karim said.

In a related move, Polykar is donating $50,000 to the University of Alberta’s Faculty of Extension to fund a new pilot program called “Micro-Credentials: Communication Skills for the Workplace”.

The new Edmonton plant will also incorporate a recycling facility, which Polykar says will position it to participate in Alberta’s efforts to divert plastic waste from landfills; and will allow the company to recycle and repurpose those materials, contributing to the province’s stated goal of creating a circular plastics economy.

“This is more great news for Alberta’s economy,” Jason Kenney, Premier of Alberta, said in a statement “As we continue to recover from the global COVID recession, Alberta’s open for business approach is attracting more innovative, job creating investments.” Kenney participated in the groundbreaking event.

Founded in 1987, Polykar is headquartered in Saint-Laurent, Que. The firm was named as one of Canada’s Best Managed Companies in 2021.