Sepro closing in on another record sales year

The France-based robotic automation maker is also nearing the end of an 11 million euro expansion plan, to expand facilities in the U.S. and France, that was launched in May 2017.

Robotic automation maker Sepro Group is on track to records its sixth consecutive record sales year, and the France-based company is also nearing the end of an ambitious 11 million euro expansion plan.

For 2018, Sepro’s revenues are expected to grow by four per cent to 130 million euros, which is roughly double the company’s sales total of five years ago.

And by the end of this year, the finishing touches will be applied to the last elements of Sepro’s 11 million euro expansion plan, to expand facilities in the U.S. and France, that was launched in May 2017.

Early in 2018, the first element of the plan was completed, doubling the size of its Sepro facility in Warrendale, Pa., and making it the hub for new robot assembly, engineering, and automation capabilities in the North American market. According to Sepro, the new hub is fully operational and on pace to assemble and deliver 40 large robots to U.S. and Canadian injection molders in 2018 and to further expand production in 2019 and beyond. 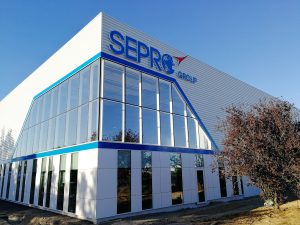 “The second and largest element of the global plan – expansion of [our] corporate headquarters and production facility in La Roche-sur-Yon, France from its current 13,000 square meters to nearly 20,000 square meters – has just been completed,” said Jean-Michel Renaudeau, managing director of Sepro Group. “The added manufacturing space enables the separation of robot manufacturing operations from the robot integration workflow, while increasing production capacity for Sepro 3-, 5-, and 6-axis robots from 3,000 to 5,000 units annually.” In addition, the French facility’s robot integration unit has been expanded by 50 per cent, enabling work teams to develop more custom robotic automation cells for European. The company has also developed new office space and opened a dedicated “innovation space” in its headquarters building.

The third element of Sepro’s expansion was also recently completed, when Sepro relocated its customer training centre from the current headquarters site to a new 800-square-meter facility nearby. “The new Sepro Campus features five training rooms and a staff of eight full-time training professionals,” Renaudeau said. “Opened in September, the new training centre can host up to 1,500 course participants annually, a 50 per cent increase over the previous centre’s capacity.” Housing more than 20 robots, the centre is also launching as e-learning and blended-learning services for trainees in remote locations, Sepro said. “This newest training centre joins other centres located in Dietzenbach, Germany, and in the U.S. in Warrendale and near Chicago,” Renaudeau said.