The firm reported 103 million euros in sales for 2016, with North America accounting for 21 per cent of that business.

Sepro Group has also announced plans to expand its facility in Warrendale, Pa., and begin assembling big robots there.

In 2016, Sepro America’s market share for all robots increased 5.1 per cent compared to 2015. In a statement, Sepro America said its share in small robots (for molding machines under 750 tons) was up slightly, but its share of the large robot market was up 14.3 per cent year-over-year – an improvement the company is attributing to the new large robots it has introduced over the last 18 months. “Sepro has always been a strong player in robots for large machines, but since we introduced three new families of large Cartesian beam robots and a line of big 6-axis articulated arm robots, that has really solidified our position,” said Jim Healy, Sepro America’s vice president of sales and marketing. “That said, our share in the small robot market continues to grow steadily.”

According to Healy, Sepro America will begin assembling robots in Warrendale in Q4 of 2017. Sepro will source beams and some other components locally, while the more technical components will continue to be manufactured at the Sepro Group factory in France, he added.

Sepro America already has a “substantial engineering and assembly capability” in Warrendale, Healy said, where it currently designs and builds integrated automation cells for delivery in North America.  “Assembling the robots themselves is a logical and easy next step in the growth of Sepro America,” he said. “Initially, the focus will be on Sepro’s new large robots (for IMMs over 800 tons) in the Strong, S7 and 7X ranges, for delivery to customers in the U.S., Canada, and possibly Mexico.” 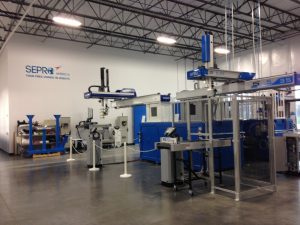 Sepro America plans to expand its facility in Warrendale, Pa. (pictured), and begin assembling robots in Q4 of 2017.

Sepro America moved into its current 16,500-square-foot facility in December 2013. The building already includes a large workshop area, which encompasses assembly, testing and warehouse space, but additional expansion is planned.