The highest achievement from Hermes, Vecoplan snagged the Platinum Award in the category of advertising and trade show exhibits for its “Shredding Frenzy” exhibit, which featured a shark tank meeting room, fully loaded interactive technology space, and a hanging sign that used lights and computer images to project sharks.

“NPE 2015 was one of the most successful trade shows we’ve ever participated in and our shark themed booth contributed greatly to that success”, stated Kim James Marketing Director of Vecoplan, LLC. “It literally stopped attendees in their tracks and enticed them onto our booth. I think this award winning exhibit is a perfect example of a true team effort-paying off in big time ROI.”

Hermes Creative Awards is an international competition for creative professionals involved in the conceptualization, writing and design of marketing materials or programs. There were over 6,000 entries in 2015, from 22 different countries around the world that competed in 195 different categories. Those categories ranged from advertising to integrated marketing, public relations, electronic media and trade show exhibitions as well as everything in between. These awards are overseen and judged by the Association of Marketing and Communication Professionals. 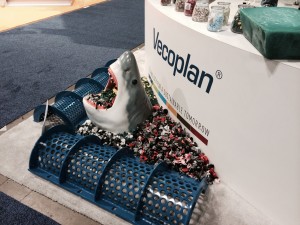 The shark close up.