The 10,000-square-meter site in the city of Suzhou will be dedicated to the design and production of complete automation systems for the treatment of plastics, food powders, and refrigeration solutions. 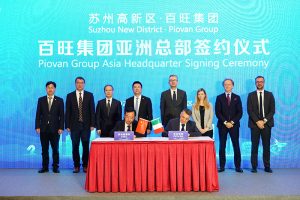 Italy-based Piovan Group is adding to its footprint in China by building a 10,000-square-meter facility in the city of Suzhou to produce automation systems for the plastics, food powders, and refrigeration markets.

“Piovan has been on the Chinese market for over twenty years,” the company said in a July 15 news release. “The opening of the first commercial office in Hong Kong dates back to 2000, while the opening of the first production plant was in 2005 in Zhuhai, in the Guangdong province, and then in 2008 in Suzhou, in the Jiangsu province.”

“The decision to invest in the construction of a new plant confirms once again the strategy that the Group has been pursuing for years: investing in the development of an international and structured network with direct branches to always be alongside its customers around the world, from sales to after-sales service,” it added.

The new site in Suzhou will be the “reference headquarters” for all the Group’s branches in the Asian region, the release said, including Piovan Thailand in Bangkok, Piovan Vietnam in Ho Chi Minh City, Piovan Japan in Kobe, and ToBa PNC in Seoul, South Korea.

“It will have offices, technological laboratories for testing, showrooms, warehouses, a production area designed according to lean methodologies and – very important – the new R&D department dedicated to the development of innovative technologies,” Flavio Zaghini, Piovan China’s general manager, said in the release.