Over 3,000 exhibitors from more than 60 countries have registered for the show in Germany in October, and will occupy the entire exhibition grounds with some 1.8 million square feet of net exhibit space. 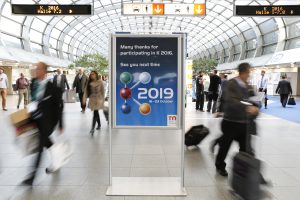 More than six months before it kicks off, the K 2019 trade show in fully booked with exhibitors.

Over 3,000 exhibitors from more than 60 countries have registered and will occupy the entire exhibition grounds with some 1.8 million square feet of net exhibit space, show organizer Messe Düsseldorf said.

The exhibitor database is now available at www.k-online.com/2410. At the end of March 2019, the online ticket sales will also be launched at www.k-online.com. These e-tickets are less expensive than tickets purchased in site and allow free use of all public transportation within the Rhine-Ruhr regional network (VRR) of Düsseldorf to and from the trade fair.

Held every three years, the K show is the world’s largest plastics trade show. The first K event was organized by Messe Düsseldorf in 1953; the last staging of K in 2016 attracted 3,293 exhibitors from 61 countries on more than 1.8 million square feet of net exhibit space and 232,053 trade visitors, with over 70 per cent coming from outside Germany.