Located near Charleston, the 116,000-square-foot facility will provide for expanded sales, applications, service, and training functions. 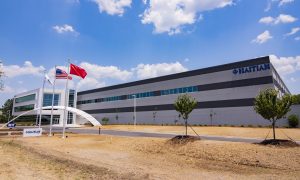 The exterior of the new Moncks Corner facility.

The new facility, which is located just outside of Charleston, is designed to provide additional capacity and capabilities to support Haitian International’s product lines for injection molders in the U.S. and Canada. The company already has existing facilities for the U.S. and Canada in Worcester, Mass.; Cleveland, Ohio; and Batavia, Ill.; plus warehousing in southern California.

Absolute Haitian held an opening ceremony with ribbon-cutting at the new plant on May 30. 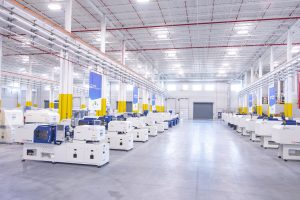 Inside the new plant.

In a statement, Absolute Haitian said that approximately 100,000 square feet of the new Moncks Corner facility is dedicated to manufacturing, warehouse, and demonstration space with the capacity to assemble and test large tonnage machines and store stock machines and aftermarket parts. “High ceilings accommodate large tonnage presses even when equipped with top entry automation,” the company said. “Three overhead cranes including one 50-ton crane, plus multi-level docks and reinforced concrete flooring facilitate the delivery and storage of large- tonnage machine assemblies. The facility’s drive-in dock enables flatbed trucks to move fully loaded onto the floor for more convenient unloading.” The facility also has 16,000 square feet of space for a training centre, applications engineering offices, and sales functions.

“Although other states along the eastern seaboard were considered, economic development officials in the state of South Carolina and regional economic development groups helped make the selection an easy one,” said Absolute Haitian co-owner Nate Smith. “The expansion of the automotive sector, presence of white goods manufacturing and fast regional growth in the southeast were major considerations. In fact, we’re located in the same industrial park as a $1.2 billion Google data center.”

“Most of the large tonnage machines sold in the U.S. are delivered to customers in the southeastern U.S., the upper Midwest states of Michigan, Ohio and Indiana, and Canada, forming a large machine corridor,” said Glenn Frohring, co-owner of Absolute Haitian. “The deep-water port of Charleston allows us to connect easily to that corridor via nearby intermodal transportation options for fast delivery to the customer.”

Absolute Haitian is the exclusive sales and service partner of Chinese injection molding machine maker Haitian International. The company is represented in eastern Ontario by Larry Bonehill of Shadow Automation and in western Ontario by Steve Bell; and in Quebec by Barway Plastics Equipment.