Injection molding machine supplier Absolute Haitian Corp. is making some big moves to beef up its capabilities in Canada and the U.S.

The Worcester, Mass.-based company, which is the exclusive sales and service partner of Chinese injection molding machine maker Haitian International, is expanding its operations to provide additional capacity and capabilities to support Haitian product lines.

The announcement was made at the NPE2018 trade show currently underway in Orlando, Fla.

The expansion includes construction of a new 116,000-square-foot operations facility in Moncks Corner, South Carolina, just outside of Charleston. This facility will provide for expanded sales, applications, service, and training functions. In addition, the facility will add new capacity and capabilities in the areas of assembly, test and customer demonstration of large tonnage machines and work cells.

“The new plant will provide enough space for stock machines and will allow us to pursue a range of domestic machine assembly options in collaboration with Haitian, based on the needs of the market,” said Glenn Frohring, president and co-owner of Absolute Haitian.

The facility is expected to be operational in 2019, Frohring added.

“The selection of the Charleston area was driven by many factors,” Absolute Haitian co-owner Nate Smith said. “These included expansion of the automotive and manufacturing sectors in the southeast region and access to Charleston’s deepwater port. Although other states in the region were considered, the State of South Carolina and the regional economic development groups made the selection an easy one.”

The South Carolina expansion comes quickly on the heels of a major infrastructure project at Absolute Haitian’s Worcester headquarters facility that is now completed. Haitian International recently completed expansions in Mexico with a grand opening of a technical support centre in Tijuana. Additional service centres in Mexico are in the planning stages. 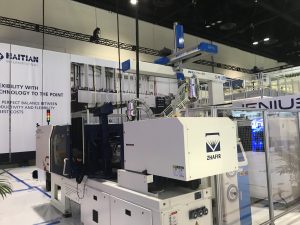 A Sepro robot integrated with a Haitian injection molding machine at NPE2018.

And in another move aimed at improving Absolute Haitian’s domestic product offering – and also announced at NPE2018 – the company has now partnered with robotic automation supplier Sepro America to make 3-, 5- and 6-axis robots built by Sepro available with Haitian and Zhafir plastic injection molding machines sold in Canada and the U.S. All robots will have a user interface based on Sepro’s Visual robot control that is fully integrated and accessible from the IMM operator interface. Absolute Haitian technicians, trained by Sepro, will provide after-sale service.

“This integrated offering gets to heart of the benefits customers will experience with Industry 4.0,” Frohring said. “It allows customers to select products in a way that makes sense for them, rather than being boxed into single-supplier solutions.”

Haitian products are sold in more than 160 countries with machine sizes ranging from 44 to 7,425 U.S. tons of clamp force.

Absolute Haitian is represented in eastern Ontario by Larry Bonehill of Shadow Automation and in western Ontario by Steve Bell; and in Quebec by Barway Plastics Equipment.