“We’ve had phenomenal growth over the past five years, with annual sales increasing from $10 million to $30 million and employment from 85 workers to more than 120,” said Tim Galbraith, general sales manager at the company, which opened its doors in 1975. “But we grew without any bricks and mortar, and one of the sacrifices was that our assembly areas have gotten progressively smaller, to the point where we’ve had to use aisle space for final assembly of tools, which is not ideal.”

The new addition to the company’s existing 50,000 square feet of space will be dedicated to advanced assembly and final manufacturing, Galbraith said, and will link the firm’s two existing buildings. “We will set up stations that will be fully equipped, and every group will have a fully stocked area for final assembly,” he explained. “We are planning to officially open the addition in March 2017.”

Although Cavalier began as a company catering primarily to the auto industry, it shifted its focus about nine years ago under the direction of president Brian Bendig, the son of one of the three original partners. “We diversified our base to include recreational, agricultural, and commercial customers,” Galbraith said. “We are unique in being primarily non-automotive.” 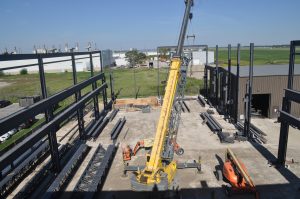 The firm is also unique in the amount of time and resources it gives back to the Windsor community. “Brian Bendig is very involved with technical programs in the local high schools and apprenticeship programs in the local colleges; he volunteers his time and gives his input to help design the curriculums,” Galbraith said. “We also promote tours from high schools and community colleges, and had 500 students through our facility in 2016 on a variety of tours. We are actively lobbying the community, showing young people that manufacturing is a good career choice that involves challenging work on multi-million dollar machines.”

Cavalier expects to hire at least an additional 20 skilled trades workers once the expansion is complete, Galbraith said. “We are bursting at the seams, and would have even more work now if we had enough skilled trades,” he said. “We realized early on that the only way to achieve our goals was to embrace new technology. Brian Bendig and others from our firm have traveled the world to find the most cutting edge technologies available and incorporate them here, and it’s paying off.”