Founded in July 2014 to refurbish blown film equipment, the Mississauga, Ont.-based firm has now started to design and build its own products.

It always feels good to exceed expectations. Trump did it in November, and Cyber Plastic Machinery Inc. is doing it now. The firm was founded in July 2014 to fill a gaping hole in Southern Ontario’s blown film industry by servicing and upgrading all brands of existing equipment – and they did it well enough to transition into manufacturing their own equipment in a new facility. “We started off as exclusively a machinery refurbisher – barrels, screws, air rings, dies, oscillators, bubble glides and bubble cages – and have now transitioned into manufacturing new equipment, although we still perform refurbishments,” said Dawn Krycki-De Santis, the firm’s head of sales and marketing. “This evolution happened primarily at the request of our refurbishment customers, who began asking us to design and build new blown film equipment for them.”

Originally located in Brampton, Ont., Cyber Plastic moved to a 3,000-square-foot facility in nearby Mississauga in April 2016. “We needed to expand into our own premises – we were renting part of a facility at our old location – and being located in Mississauga puts us right in the middle of our supplier base,” Krycki-De Santis said.

Cyber Plastic is a two-person company – Krycki-De Santis and operations manager Liviu Sas – and uses the services of several local contractors when necessary. “We have a low overhead and can pass the savings on to our customers,” Krycki-De Santis said. 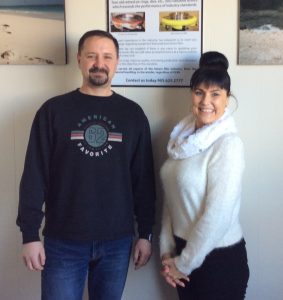 To date, the firm has commercialized three new technologies. “We’ve developed an ABS air distribution manifold that we can retrofit to any OEM air ring,” said Liviu Sas. “It eliminates the clutter of hoses that usually surrounds the air ring by having only one air hose feeding the manifold installed on top of the air ring. It also protects the plastic bubble at its most vulnerable state, when it exits the die.” The firm has also developed its own complete laboratory blown film line, intended mainly for testing by resins companies, laboratories, schools, and end users. “We’ve also developed our own dual lip air ring,” Liviu Sas said.

In the end, it was an unexpected but welcome transition for the firm. “Our original goal was to work with the OEMs by refurbishing the small parts that they didn’t have time to do, and our goal has now expanded to become a preferred supplier to the OEMs in our industry,” Liviu Sas said. “This is a good thing, as it keeps the industry innovative.”