She and her late husband Marvin Holland founded the international resin distribution firm in 1950. 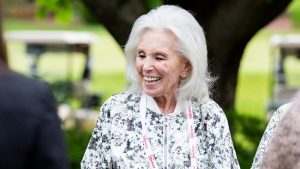 Joan Holland, co-founder and chairperson of the board at Northbrook, Ill.-based resin distributor M. Holland Co., died in Chicago on Sept. 8 at age 91.

Along with her late husband Marvin Holland, she founded the firm in 1950 from the couple’s apartment in Chicago with $600 she had saved. Marvin Holland had come into the plastics business by working at a local plastics injection molder while in school. A corner of the couple’s dining room doubled as M. Holland Co.’s first headquarters — an operation that consisted of a telephone and a borrowed typewriter sitting on a card table gifted to them for their wedding.

The company grew from a small, regional plastic resin distribution company into an international business with customers throughout North and South America and Europe. Along the way it moved into a 160,000-square-foot warehouse in Chicago in 1990, expanded into Canada to found M. Holland Canada Co. in 2004, expanded into Mexico in 2015, and acquired a series of other distribution companies.

After Marvin Holland’s death at age 70 in 1994, the couple’s son Edward became the firm’s president and CEO and Joan Holland assumed the role of chairperson.

In a statement on her passing posted on its website, company officials said she became “a strong voice of the company and a driving force for all who heard her speak.”