The Book on plastics

When it comes to running Peterborough, Ont.-based custom molder G.B. Book Plastics Ltd., the brother/sister team of Bill Book and Cathy Cremers has always been on the same page.

From Cain and Abel onward, history is littered with examples of siblings who just couldn’t work it out. But you won’t find the brother-and-sister team of Bill Book and Cathy Cremers among them. The co-owners of Peterborough, Ont.-based customer molder G.B. Book Plastics Ltd. have always seen eye-to-eye when it comes to business – which may be one reason why the 40-year-old firm skillfully navigated the Great Recession and came out not only undamaged, but with the resources to expand into new areas of manufacturing. 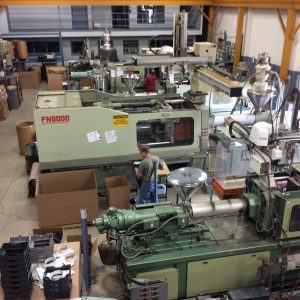 In some ways, it’s a familiar story: like many shops, G.B. Book began with one processing machine running out of a one-bay garage in a rented building. “The business was founded in 1976 by my parents, Barry and Melissa Book,” said Bill Book. “My father had a solid background as a business executive, having been president of Singer Sewing Machine in Canada at one time, and his interest in the plastics industry began in the early 1970s, when he was retained by a bank to look into the financial viability of automotive injection molder G.S. Wooley.” The senior Book purchased a machine and obtained his first business, a million-piece contract for parts used in a tape dispensing machine for grocery stores. “The early days were rough: my mother and father took turns running the machine and our family lived off RRSP savings,” Bill Book said. “My father was a great believer in trial-by-fire as a learning method, and he applied it not only to himself but also to my sister and me, since we both worked in the shop on weekends from our early teens onwards.”

AHEAD OF THE CURVE

The 1970s was a special time in Canada’s plastics industry: there was a lot of money to be made, for sure, but also a fly-by-the-seat-of-your-pants resourcefulness that spawned a million ad hoc improvisations that probably wouldn’t happen in today’s more controlled atmosphere. G.B. Book and its customers had to think fast more than once. “For its first three years, our company supplied General Motors directly in Oshawa,” Bill Book said. “On one occasion they lost a shipment of our parts, and hired a taxi to come and pick up replacements. We filled the cab with parts and the driver took them back to the GM plant.”

The company also made other, more deliberate decisions over the years. “My father was ahead of his time in many ways,” Book said. “He bought the first two-arm robot in Canada in the mid-1980s. He also had the foresight to install an MRP system in our plant tailored for plastics manufacturing; according to the MRP vendor, it was the first system ever sold to a plastics processor in Canada.”

One of the company’s biggest and earliest decisions has shaped everything since. “We came to a fork in the road in our early years, chose to get out of automotive parts molding in favour of a variety of other markets, and never second-guessed that decision,” Book said. “We now specialize in the manufacture of precision, high-tolerance components for the construction, aerospace, appliances, electronics, medical device components, oil and gas, mineral exploration, and sporting goods markets. It’s a good mix and we aren’t reliant on any one industry.”

When Barry Book retired in 1991, the company faced a transition common to family-owned custom molders. In this case, though, it wasn’t a given that the second generation of Bill and his sister Cathy would take the reins, despite the fact that both had been working for the firm for more than a decade. In fact, they had to apply for the top jobs. “My father gave us each two weeks to think about it, and then we had to submit a joint business proposal/resume for him to review,” Bill said. “He wanted us to be 100 per cent committed. It’s not unusual for the first generation to build a business and the second generation to lose it; my father didn’t want that to happen with us.” 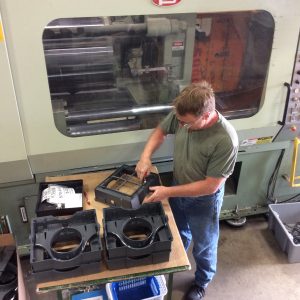 Getting busy on the shop floor. Photo Credit: Canadian Plastics

A similar transition came when Barry Book passed away in 2003. “Although my father had retired 12 years before, he remained a great teacher and an important, guiding presence at the company,” Book said. One of the biggest lessons the senior Book taught his children was to save for a rainy day – and the message stuck. “We’ve always been cautious financially,” Book said. “We hunkered down through the recession as the orders slowed and used our savings to help keep our key workers busy painting the floors and doing other necessary maintenance while also filling customer orders. Now that business has recovered, we maintain a war chest of funds available for new equipment or slowdowns in the economy. We have a line of credit at our bank that we haven’t touched in 25 years. We believe in keeping our debt to a minimum because you never know what the future will bring.”

That doesn’t mean the firm won’t spend when necessary. “We bought a new injection molding machine 2 years ago – giving us 12 machines in total, ranging from 40 to 500 tons – and we’re looking to buy another machine next year,” Book said. “We currently run Nissei and Sumitomo presses, and almost every machine has its own automation.” And the company’s IQMS MRP system, which has been upgraded to a Windows-based operating system, is specifically tailored to an injection molding plant and has enabled the company to monitor many key facets of production operations and material and product flow.

The company is also considering two acquisitions. “We’re looking at buying two small companies that would give us proprietary products,” Book said. “It’s something we’ve never done before; we have some proprietary work now, but this would diversify us that much more.”

If you’re wondering whether G.B. Book’s disciplined approach pays off, look no further than its recent Supplier of the Year award, bestowed by a large U.S.-based customer.“This customer has over other 300 vendors, so it’s a real honour for us to have been selected – and most of the credit goes to our well-trained work force,” Book said. The shop has 15 workers at present, most of whom are long-service. “Our people are one of our biggest strengths,” Book continued. “Our plant manager Steve Nelson has been with us for over 30 years, and started as an operator; we have four other employees who also started as operators and rose through the ranks. All of our people have been cross-trained to fill a variety of other jobs if someone is ill or on vacation; you need that flexibility nowadays to be competitive.”

Having solid business relationships with good suppliers outside the firm is another key to being competitive, Book said. “We’ve worked hard to create alliances with our material suppliers and tooling vendors, and they’re there when we need them,” he said. 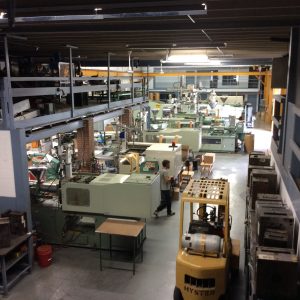 As G.B. Book heads into its forty-first year of business, it’s not hard to see it as the tortoise winning the race against a bunch of flash-in-the-pan – and now bankrupt – hares. “We’ve picked up a lot of new work in the past year but it hasn’t come quickly or easily; we’ve quoted and followed up again and again,” Book said. “I think our success ultimately goes back to lessons learned from my father. He taught us the fundamentals, including the critical importance of treating both customers and vendors properly. He left behind a company with an excellent reputation and a solid foundation for growth.”

So if you’re looking for a Cain and Abel-like dysfunctional family story, you’ve come to the wrong custom mold shop. If you want to succeed in today’s business world, however, you might consider stealing a page or two from G.B. Book’s book.