Recapitalization, new technology and new hires, a plant expansion, and green initiatives are all part of this Richmond, B.C.-based company’s growth strategy.

Unless you’re a perennial bottom-dweller like the Toronto Maple Leafs, a complete business makeover is a bit extreme – but its working wonders for Richmond, B.C.-based flexible packager and converter Flexstar Packaging Inc.

To be fair, Flexstar never got anywhere near the depths plumbed by the Leafs, although it has gone through no less than eight changes in ownership since its inception back in the 1970s. Under stable ownership at last, however, the company is finally well positioned for success, having gained the focus and stability it takes to make it to the flexible packaging big leagues. 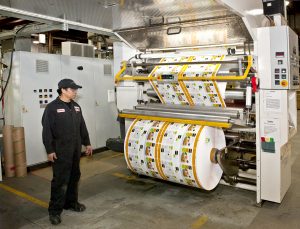 The name aside, today’s Flexstar doesn’t much resemble the company as it existed under previous ownership regimes. “The current ownership, which took control of the company in 2005, has followed a very significant capitalization program to dramatically change the product lines we sell our customers,” said Flexstar president and CEO Marc Bray. “Whereas the firm started off in the 1970s making commodity products like T-shirt sacks and produce bags, our focus today is on custom printed, laminated, flexible roll-stock and specialty films for the consumer and industrial markets. Our products include barrier laminations for food products, plain and printed films, cold seal roll-stock, foil laminations, boilable, microwavable and retortable laminates, pre-made bags and pouches, and unprinted industrial/converter film.”

The shift in Flexstar’s product offerings came about when the present management decided the company could fill a valuable niche: a full-service flexible packager for customers in western Canada and the U.S. that had historically been underserved and forced to rely on suppliers in eastern Canada and the U.S., or even the Far East.

Like any fundamental change, Flexstar’s transformation hasn’t been easy – or inexpensive. “Changing our focus has meant investing in a lot of new technology and equipment,” Bray said. “Since 2005 we’ve invested approximately $17 million in the plant, beginning with the establishment of our own graphic department, followed by the purchase of three Combi laminators and both film extrusion and printing equipment from Windmöller & Hölscher.” Most recently, Flexstar installed a Windmöller & Hölscher Miraflex S flexographic printing press, the first of its kind in North America. “The Miraflex S has been in full operation since November 2015,” Bray said. “We have wide-web presses at Flexstar; the Miraflex S is a narrow to mid-web press that complements the machinery we have and is able to reliably tackle any kind of job we need to run, regardless of size or if the job is a PET, OPP or thin gauge PE application.”

Additionally, Flexstar is in the process of adding 32,000 square feet of space for warehousing and specialty converting applications. “The first 16,000 square feet opened last year, and the rest opened in August, giving us a total of 91,000 square feet of space,” Bray said. “The new building houses our new innovation centre, where our customers can come and learn about structures and filling technologies, as well as new types of packaging, including stand-up pouches.” 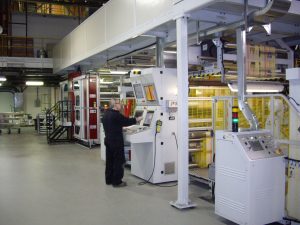 And as part of Flexstar’s commitment to long-term social responsibility, the company is working on a regenerative thermal oxidizer to eliminate VOC emissions. A heat exchanger will capture energy for plant heating and specialty lamination applications requiring hot room curing.  “The project is scheduled for completion in fall 2016, making us the first flexible packaging converter in Western Canada with this technology,” Bray said.

Flexstar has updated more than just its machinery. Key hires – including Dale Ince, vice president of technology; Darcy Asham, operations improvement manager; and Mike Aves, director of operations – have beefed up the firm’s service and quality operations, which now includes a new information system that allows customers to track and access inventory and shipping schedules. “The new staff members blend well with the rest of our workforce, some of whom have been at the plant for more than 30 years,” Bray said. “We have 125 workers at present, which is a good size for us.” And even the company’s longest-serving workers aren’t too old to learn. “Each time we’ve acquired a new Windmöller & Hölscher machine, we’ve sent workers to Windmöller & Hölscher’s training facilities in Germany for both classroom and hands-on instruction,” Bray said. “It’s just good business: if you’re spending millions of dollars on a new blown film line, it doesn’t make sense to scrimp on employee training.”

And speaking of millions of dollars, Flexstar’s most recent financial numbers testify to the success of its remarkable turnaround. “We have annual sales of over $36 million, which represents a doubling of our revenue in the last five years, and we expect to double it again within the next five years,” Bray said.

These numbers also show that the owners’ strategy of filling a packaging void in western North America is paying off in spades. But Bray, for one, believes Flexstar’s approach would work just about anywhere. “There are cost advantages to being in Canada, but they’re not considerable; I think we owe our success to our own particular business strategy and skills, and we could make it work in any country,” he said. “We have a clear vision, a heavy focus on people, and are nimble so we can quickly respond to changing customer needs. In the modern era of supply chain work and short lead times, that flexibility in particular is crucial.”