From aerospace engineering to high finance to plastics packaging is quite the career arc. But when Amir Karim returned to Quebec and joined family-owned Polykar Industries after a successful stint on Wall Street, he didn’t know his best business days were still to come; or that his career trajectory would propel him into the ranks of the elite, as the Canadian Plastics Industry Association’s 2016 Leader of the Year. 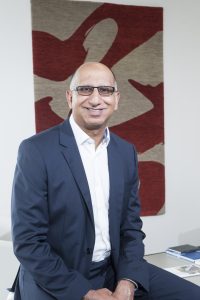 Amir Karim, chief operating officer of Saint-Laurent, Que.-based Polykar Industries, never pictured himself in the plastics industry when he was younger, despite the fact that Polykar is a family-owned enterprise founded by his parents Elyse Damdjee and Aziz Karim. “I wanted to be an astronaut when I was a child,” Karim said.

It didn’t quite pan out that way, but the Canadian Space Agency’s loss is the plastics industry’s gain: In his 15 years with Polykar, a manufacturer of polyethylene film garbage bags and industrial and food packaging, the 48-year-old Karim has been instrumental in helping the company grow through a series of investments and expansions, and has been no less instrumental volunteering for some important pro-plastics advocacy, as well as a variety of other charitable activities. “Amir was the driving force behind Polykar’s construction of its brand new, expanded production facility in Saint-Laurent, which included a $4-million investment in new three-layer blown film, converting, and recycling equipment,” said Randy Shermet, Polykar’s vice president of sales and business development. “As an industry advocate, meanwhile, he served on the task force that addressed the Montreal plastic bag ban earlier this year, and served on the Canadian Plastics Industry Association’s Board from 2009-2015 and as CPIA Board chairman from 2013-2015. And as a philanthropist, he was invited to a meeting in 2015 between Prime Minister Stephen Harper and Bill Gates that focused on the Canadian government’s support of global maternal, child, and newborn health; and he also supports Polykar’s annual donation of one per cent of all sales to various charities. In short, Amir is an excellent entrepreneur and an excellent spokesman for the industry.”

All of which helps explain why Karim has now been launched into a different kind of stratosphere altogether, as the CPIA’s Leader of the Year for 2016.

Although he never made it into literal outer space, Karim’s childhood ambition of becoming an astronaut was at least partially realized for a time. “I studied aerospace engineering at the University of Toronto and then worked in a lab testing composite materials for use in space,” he said. “But it was more monotonous that I anticipated, so I went back to school and completed an MBA in Finance at HEC Montreal.” Graduating in 1992, at the beginning of the 1990s technology boom, Karim quickly found work as a research analyst. “I covered many of the technology companies specializing in Canadian stocks such as Nortel, Mitel, and Research in Motion,” he said. “My engineering/finance background was a valuable tool in this environment, and I was hired by Deutsche Bank in 1994 and then in 1998 moved to Goldman Sachs in New York City.” Warned by a seeming sixth sense that the dot-com bubble was about to burst, Karim left the industry in early 2001 and returned to Quebec. “I’d had a very good 10-year run, got out before things turned bad, and was looking forward to relaxing for a while,” he said. 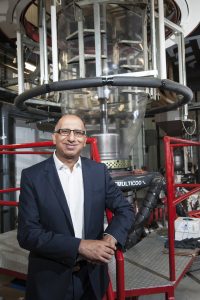 Once again, however, events unfolded differently than planned. “I started visiting Polykar just to say hello to my family, and my visits became longer each time as I began to spend more and more time on the shop floor getting to know the workers and the business,” Karim said. “I learned how the bag-making process worked and how to set-up and operate nearly every machine on the plant floor.” But when he signed on with the company in late 2001 as vice president of sales, it wasn’t just a case of the prodigal son returning to the fold. “As opposed to what happens in many family-owned firms, there had never been a plan for me to join my parents’ business,” he said. “I only did so because I believed I would be a good fit, given my background in engineering and finance, and I was also intrigued by the challenge of helping take the company to the next level.”

Founded in 1987 as a manufacturer of garbage bags, Polykar was still making nothing but in 2001 – which, Karim believed, was both a strength and a potential weakness. “My parents worked extremely hard to make a very good product that had an excellent reputation, and they had grown the business from zero to about $7 million in annual sales, almost all of that in Quebec,” he said. “But their story wasn’t being told – the company didn’t advertise and relied on word-of-mouth to get its message out. My goal was to share Polykar’s story with new potential customers outside Quebec, and I spent most of the next eight years travelling around Canada meeting distributors. During that time, we were able to grow to between $15 million and $20 million in annual sales.”

But, much as he had foreseen the dot-coms dot-bombing years before, Karim was growing uneasy about the long-term viability of the traditional garbage bag industry. “Even as I was selling, I became convinced that the black garbage business didn’t have much more room – if any – for growth, due to the marketplace becoming more sensitive to waste and the growing use of recycling,” he said. “So although we kept our involvement in garbage bags, I convinced our family to diversify into other markets, including the manufacturing of compostable bags, and to enter the food and industrial packaging markets. Our goal is to create a solid foundation for the company to grow further.” And when Karim says “further”, he isn’t kidding. “We’ve already transitioned from a small to medium-size business into a medium to large-size business, and my ultimate goal is for us to go bigger still: to reach $100 million in sales,” he said. “Working in finance in the 1990s, I had access to some of the best CEOs and entrepreneurs of the time, and I learned a lot from them about how they grew their businesses. So I’m confident we can do it at Polykar.”

But Karim’s drive also extends to helping grow the industry as a whole. “I enjoy participating in industry and civic causes, and I also believe that if you have success, you should give back, both in time and in financial resources,” he said. “My involvement in the CPIA reflects that: It’s satisfying to be able to volunteer my time to help the industry get ahead and confront some of the challenges it faces, especially in the areas of promoting sustainability and fighting back against anti-plastics legislation, and changing some of the misconceptions about plastics. I feel a loyalty to the industry, and it disturbs me to hear false information about it being spread around, especially when the industry is working so hard to become more sustainable and environmentally responsible.”

To close the loop, Karim’s involvement with CPIA was also a good way to help Polykar. “As an SME, I would never have access to the bigger players in our industry on my own; my association with the CPIA Board has helped me make valuable connections,” he said. “As with any association, you only get out of CPIA what you put into it. You get a lot more out of your membership dues if you also become involved.”

As astute as it is, Karim’s sixth sense didn’t see his selection as CPIA’s Leader of the Year coming. “My first reaction when I heard the news was, why me?” he said. “Having thought about it since, I believe the award is actually for all the SMEs in our industry. The plastics industry is probably the last major manufacturing sector in Canada that hasn’t fallen victim to massive consolidation; we still have many small and medium-size companies making great products, and we don’t always get the profile and recognition we deserve. So I’m honoured to accept the award as a representative of this group.”

However you want to look at it, it’s well-earned recognition for a career arc that started in space and then continued upwards.