PET Technologies is crossing the pond

After almost 20 years of selling its blow molding machines and blow molds into Europe, the Middle East, and Asia, Austria-based PET Technologies has now set its sights on North America.

Starting with Christopher Columbus in 1492, there’s been a trend: Europeans cross the Atlantic and make a big impact in North America.

Neunkirchen, Austria-based PET Technologies GmbH, a manufacturer of blow molding machines and blow molds, is hoping to keep that trend going. Founded in 1999, the company’s equipment has been installed in more than 40 countries in Europe, the Middle East, and Asia; and now, with the development of its new APF-Max stretch-blow molding machine with 4-, 6- and 8-cavity configurations and output up to 14,000 bottles per hour, PET Technologies is determined to make its mark in Canada and the U.S.

The all-electric APF-Max can blow containers from 200 milliliters to 3 litres for the beverage, health care, cosmetic, dairy, beer, and other markets, and offers a wide range of neck sizes from 18 mm to 48 mm. According to Vladimir Tsallagov, PET Technologies export director, the APF-Max was designed with the North American market specifically in mind. “North American custom blow molders have unique demands, primarily the need for flexible changeover of neck and preform sizes, and sometimes bigger capacities and higher speeds than the European market requires,” he said. “The APF-Max gives them this flexibility by offering something unique: it can have 4, 6, or 8 cavities on the same platform, which means that customers can start with four cavities and upgrade to six and then eight as their production needs grow. It’s ideal for medium-size custom blow molders.” 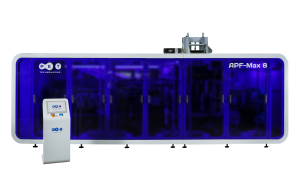 And to reduce energy use, Tsallagov continued, the APF-Max has a short-wave near infrared heating system. “In the eight-cavity version, which can make up to 14,000 bottles per hour, the total installed power on the machine is 140 kilowatts, which is very low,” he said.

The APF-Max is also priced to be more than competitive with the rest of the market. “It can cost up to 40 per cent less than similar blow molding machines,” Tsallagov added.

Another prong in PET Technologies’ expansion strategy involved finding a North American sales representative. The company signed on the dotted line with Chicago-based Sopro Machinery LLC 18 months ago, which is its exclusive distributor in Canada and the U.S. “We did the market research and found the right sales partner in Sopro,” Tsallagov said. “Our machines arrive in North America in two modular pieces that fit together. Sopro will stock all critical parts.”

And the push into the Americas is already beginning to pay off. “We’ve sold several machines to some South American blow molders, and several into the North America as well,” Tsallagov said. Among the sales into North America were two four-cavity APF-6004 blow molding machines purchased last year by plastic drink bottle molder Triumbari Corp., of Bolton, Ont. “We were looking to add capacity, and bought an APF-6004 machine that PET Technologies custom built for us,” said company president Joe Triumbari. “We were very happy with it, and so we purchased a second APF-6004 shortly after. Each machine can make 6,000 bottles per hour. They’re just what we needed, and the service is excellent.”

PET Technologies’ foray into North America is just the latest development during a busy time for the company. “We opened a new 4,000-square-meter manufacturing plant in Chernihiv, Ukraine a few years ago,” Tsallagov said. “The facility has two R&D departments: one for machines and one for molds. And then in January 2018 we opened an adjoining 1,500- square-meter, two-storey office complex.” While PET Technologies machines are designed at the company’s headquarters in Austria, all the parts are produced and assembled in Chernihiv. “We don’t outsource anything,” Tsallagov said. “We do all the manufacturing and assembling of machines ourselves.”

To further emphasize its arrival on the North America scene, PET Technologies will also exhibit at the NPE trade show for the first time. The only disappointment? “We won’t have an APF-Max at our booth at the show because the demand is too great: The first machine was sold to a customer in the Ukraine and the next one in production is going to a customer in Russia,” Tsallagov said. “But it was already displayed earlier this year at the Drinktec trade show.” Instead, PET Technologies will be exhibiting its APF-3002 automatic stretch blow molding machine. “It has an output of 3,000 PET bottles an hour from two cavities and is capable of producing original shapes and designs,” Tsallagov said. “Our company is interested in the future – we’ve done the prep work and are ready to expand into North America, and we’re hoping that being at NPE will send that message to the industry.”