Polytarp Products got its start – not to mention its name – by making tarpaulins, and then became famous supplying plastic film for the construction industry. But it has reinvented itself over the past 10 years as a go-to supplier for high-barrier food packaging – and blown film machinery maker Brampton Engineering has been there every step of the way.

From Caesar and Cleopatra to the Coen brothers, history is filled with successful partnerships. And the key is that, while each is formidable on its own, the partnership brings out the best in both. By this standard, the ongoing partnership between Polytarp Products and Brampton Engineering (BE) is a case in point. With more than 90 years of combined business experience between them, this dynamic duo have prospered in a mutually productive relationship that dates back to the mid 1980s — and that has grown especially productive in the last decade. 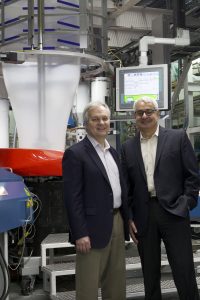 Headquartered in Toronto, Polytarp is an international supplier of PE film products — including single and multilayer sheeting, tubing and bags — for businesses across a wide range of industries, from construction and food packaging to automotive, furniture, and agriculture. But it wasn’t always this way. Founded in 1957, the privately operated company transitioned into manufacturing plastic film for the construction industry, where it became preeminent in Canada, particularly through its trademarked Super Six brand vapour barrier, which is sold from coast-to-coast. “The brand name Super Six became a generic name that everybody knows, like Tylenol,” said Polytarp president Steven Ghantous. Polytarp remains the largest supplier of vapour barrier in Canada, but 20 years ago the company decided to diversify into the food packaging industry. It was a transition that started slowly, and that didn’t require new machinery at first. “Food packaging was a simpler industry back then, and our early products were simple monolayer films that we could manufacture with the monolayer lines we already had,” Ghantous said. “These machines really weren’t designed for making food liners.”

But the food packaging industry evolved, and multilayer film structures combining barrier, bulk, and sealant to provide high-barrier levels to oxygen, water vapour, aromas and flavours, and UV light quickly became the norm. Polytarp wanted to evolve as well, but in some ways it remained a victim of its own success: Even after 10 years in the food packaging sector, it was still perceived as a company that made construction film. So it doubled down. “We made a firm commitment 15 years ago to become a reliable supplier of high-barrier food grade packaging,” Ghantous said. To that end, the company hired a chemical engineer experienced in film structures to head up an R&D department. “A product of this research was to create specific structures to manufacture higher barrier films, which keep food fresh during transport and enhance shelf life in the supermarket,” Ghantous said. “We also hired additional engineers, and outfitted a state-of-the-art testing lab.”

A GOOD RELATIONSHIP GETS BETTER

And Polytarp also turned to BE. Headquartered in Brampton, Ont., BE had already been a go-to supplier for Canadian and international packaging companies for decades, providing multilayer air blown and water quenched film systems, film winding, and other film production technologies; and had been among the first to deliver complete 8, 9, 10, and 11-layer blown film systems to the market. “We’d purchased machinery from BE in the past, but they now became virtually our exclusive equipment supplier during our upgrade,” Ghantous said. “First, we purchased a seven-layer BE extrusion machine and then four years later we added a nine-layer system. We also invested in new winders, because the way plastic film is rolled up is very important to our customers’ automated packing equipment.”

Most recently, Polytarp just purchased a new five-layer extrusion line from BE, which became operational in March. Five-layer film has largely replaced three-layer film, according to Mike McAlear, BE’s director of sales for North America. “More and more blown film is going five-layer,” he said. “It allows you to better control costs by using more cost-effective materials and reducing the percentage of more expensive skin layers.” The new machine was necessary to keep up with increasing demand from Polytarp’s customers, Ghantous said, and also positions the company for more growth going forward. “We cater to what our customers’ needs are, and they needed us to increase our capacity with the five-layer extruder,” he said. “But it will also allow us to go after new customers because it allows us to use harder, stronger polymers that provide better barrier properties and create clearer films.” Polytarp now operates 11 extrusion lines in its 115,000-square-foot facility, and has invested over $10 million in new equipment over the past decade, and its nine- and seven-layer machines each took an entire year to build and install. But the move to high barrier film has involved more than just spending money. “It takes a lot of technical know-how — there was a big learning curve involved in going from three layers to seven layers, especially because of the different raw materials you have to use, and then another learning curve in going from seven to nine layers,” Ghantous said. “But we have a very dedicated work force, and they rose to the challenge.” 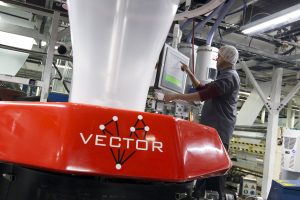 More than a few of Polytarp’s 135 employees have, in fact, worked one-on-one with the same Polytarp customers for decades, Ghantous said. “I started at Polytarp in 1984, and there are 15 employees with more seniority than me,” he added.

The payoff on this huge, ongoing investment has been well worth it, however. “Some plastic companies are still making the same commodity products today that they were 30 years ago,” Ghantous said. “That‘s not Polytarp: We’ve diversified to the point where we’re almost unrecognizable compared to just 10 years ago. We still have some of the old, traditional products, but we have a lot of new products with the new investments that we have made.” The team has even developed its own proprietary process for creating a thin, high-barrier plastic film that is easily compatible with automated packaging equipment; the resulting product is a good fit for the current needs of the meat packaging industry, Ghantous said. Along the way, Polytarp has also cemented its relationship with BE. “Since we started dealing exclusively with BE 10 years ago, our sales have doubled,” Ghantous said. “We couldn’t have made this transition into making high-barrier food packaging without them. With every upgrade we’ve wanted to make, they worked with us to determine what machine would be the best for the job, and then delivered it on-time. Its service is outstanding.”

And BE isn’t just after the biggest sale it can get. “If a BE machine can be upgraded by adding more extruders and blenders instead of having to add a completely new die, then that’s what they’ll recommend,” Ghantous said. “They don’t automatically push for the most expensive option, which is refreshing.” The relationship has actually become something of a two-way street over the years. “Polytarp has helped us on several occasions by acting as a beta site when we develop new technologies,” Mike McAlear said. “We tested our newest Vector air ring on one of Polytarp’s BE machines before we market launched it, for example. We didn’t want to have it tested overseas or at a plant that couldn’t protect our confidentiality. Polytarp could, and it was a win-win situation: We were able to work out the bugs in a real-world environment and Polytarp got the benefits of the Vector air ring when we finished developing it.” Polytarp has also allowed BE to bring its prospective clients into the Polytarp facility for tours. “These tours let BE show its customers what its machinery can do in a real production environment,” Steven Ghantous said. “As long as they’re not competitors of ours, it’s something we’re happy to do.”

Even though Polytarp’s new five-layer extrusion line has only been running since this spring, its team is already considering the next move forward. “We are not finished with our expansion and our investment in the food industry,” Ghantous said. “The food packaging sector is always changing, and we’ll keep changing with it. When someone is looking for a high-barrier food product, we want them to think of us, and it’s working: Since we started dealing exclusively with BE 10 years ago, our sales have doubled. BE has been a valuable resource for us helping us to reach our goals, and this is a great example of two successful Canadian companies relying on each other.”