HDPE bottle made from 100 per cent ocean-bound plastics surfaces

Most pearls are produced by oysters in the saltwater environment of the world’s oceans — which makes it fitting that the first ever bottle made completely from post-consumer plastic recovered from the oceans has a resemblance to a pearl. 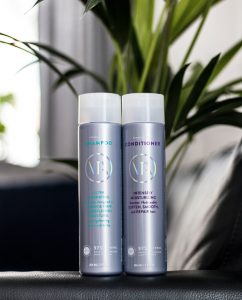 The project was challenging for several reasons. First, Primal Group, which is headquartered in Miami, Fla., wanted a specific colour and reflective finish on the bottle, which is being used to package its ViTA brand of natural, plant science-based personal care products. Typically, an extrusion grade of PE would be needed in the masterbatch as a carrier for the colourant, but that wasn’t an option in this case because Primal Group wanted the end product to be made completely from OceanBound Plastic. “The high-viscosity recycled plastic recovered and supplied by Envision is a fractional melt that makes the colourant’s metallic particles without shearing them and ruining the ultimate visual effect,” said Savvas Roubanis, a sales engineer with Los Angeles-based Techmer. “Compounding of the recipe required additional process design to assure the metallic and pearlescent effect pigments could be smoothly compounded into the recovered plastic.”

A final potential hurdle was economic, and came at the blow molding stage: If Classic Containers couldn’t manufacture the bottles within its normal, everyday processing window — which was vital to producing a bottle at the desired price point — the project wouldn’t fly. “The material processed amazingly well without any concerns,” said Kevin Tibbets, executive director of sales for Classic Containers. “Aside from the necessary additives, pigments, and non-resin components that we needed to process it effectively, the balance of the recipe is 100 per cent OceanBound resin.”

According to Envision, Ocean-Bound Plastic resin is suitable for most HDPE applications, and the company — which committed last year to recycling 10 million lbs of plastics at risk of entering oceans — is looking to help develop bigger markets for the product, and is already in discussions with several major brand owners. Which is good news because, with more than eight million tons of plastics dumped into the world’s oceans annually, the sky is the limit when it comes to using post-consumer material reclaimed from the water.