The global plastics industry’s efforts to make the value chain more sustainable by reducing the amount of mismanaged waste and recapturing as much of its value as possible requires a greater investment in chemical recycling technologies, a new study by market analyst firm Wood Mackenzie says.

Approximately 220 million tonnes (MT) of plastic waste is generated globally each year, Wood Mackenzie says, and of this, around 90MT is mismanaged and leaking into the natural environment, 70MT is landfilled, 30MT is incinerated, and another 30MT is recycled.

“Mechanical recycling has, to date, been the best way of capturing the value of plastic waste by turning it into other useful applications – however, the approach has its limitations,” said Ashish Chitalia, Wood Mackenzie’s head of polyolefins. “Chemical recycling – sometimes known as ‘advanced recycling’ – describes a range of approaches that can be used to significantly increase the amount of plastic waste that is cycled back into the chemicals value chain. Among several benefits, chemical recycling technologies reduce fossil fuel extraction and CO2 emissions, and give value to difficult to recycle plastic waste by acting as a complement to mechanical recycling.”

While chemical recycling has the potential to provide solutions to challenges facing the plastics value chain, it is not universally hailed by all stakeholders as a having a positive role to play, Chitalia said – some are concerned by the environmental impact of chemical recycling, while others consider it to be a form of greenwashing.

“Despite objections from some stakeholders, if implemented carefully, chemical recycling can increase our capacity to process plastic waste, ensure that more plastic waste is reprocessed into higher value products such as food grade applications, and reduce carbon emissions relative to some – although not all – alternative means of dealing with end-of-life plastic,” Chitalia said.

According to a scenario modelled by Wood Mackenzie, which factored in plastic packaging consumption, collection rates and optimum disposal routes for different combinations of plastic, packaging type and region, chemical recycling can double the proportion of plastic packaging that is currently reprocessed.

The results of the model, as shown in the chart below, suggest that there is potential for strong growth in both total recycling rates and absolute volumes. In combination, the proportion of plastic packaging reprocessed into the energy and petrochemical value chains would more than double, from 22 per cent today to 50 per cent by 2040. Plastic to feedstock (P2F) routes – which are better positioned to handle the dominant polyolefin applications – would be expected to grow at more than twice the rate of plastic to plastic (P2P), accounting for 17 per cent of plastic packaging in 2040 compared to eight per cent in 2020. 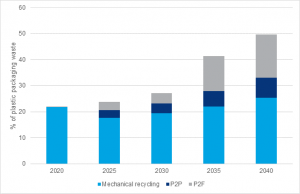 “If we look at the United States today, for example, only 13 per cent of plastic packaging is recycled, a further 17 per cent is incinerated, and 70 per cent is landfilled,” Chitalia said. “If chemical recycling can be implemented to move significant volumes of waste to the most appropriate disposal route, it will make a considerable positive impact to the sustainability of the petrochemicals industry. In a country such as the United States, this could revolutionize the way plastic waste is managed.”

1) Collection rates: The feedstock for recycling is plastic waste and this needs to be collected to be fed  into managed disposal routes. 40% of plastic waste is currently mismanaged and lost to the system. This rate needs to increase to provide feedstock for chemical recycling facilities, particularly in middle-income countries.

2) Investment: To achieve a recycling rate of 25% of plastic packaging, Wood Mackenzie calculates that $50 billion of investment will be required by 2040 to deliver enough chemical recycling capacities.

3) Value chain integration: With much of the cost of dealing with end of life plastic coming from collecting and sorting of the waste, there are likely to be considerable economies of scale by integrating waste management, refining and petrochemicals facilities to shorten the distance between waste leaving the consumer and re-entering the value chain.

Given the level of activity in the form of pilots, partnerships and investments, participants in the plastics value chain anticipate that chemical recycling will have an important role to play in addressing end of life plastic in the future, Wood Mackenzie’s study says.

“The situation is moving fast, and we are now seeing major plastics producers beginning to commercialize chemically recycled plastics, with Chevron Phillips becoming the first company to announce the production of circular polyethylene in October 2020,” Chitalia said. “The fact that there is so much activity in developing technologies and partnerships is indicative that there is confidence that these technologies will have an important role to play in the coming years.”