The nature-inspired innovation could lead to the manufacture of a new type of bullet-proof glass, or lead to the production of more durable plastic protective smartphones screens. 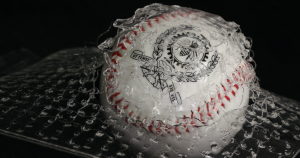 In a development that might pave the way for the creation of unbreakable plastic covers, a research team from Polytechnique Montréal has demonstrated how a web-like canvas designed by 3D printing absorbs up to 96 per cent of the energy of a shock without giving way.

Professors Frédérick Gosselin and Daniel Therriault from Polytechnique Montréal’s Department of Mechanical Engineering, along with doctoral student Shibo Zou, wanted to demonstrate how plastic webbing could be incorporated into a glass pane to prevent it from shattering on impact. The distinctive design twist in the project came from their source of inspiration: spider webs and their amazing properties. “A spider web can resist the impact of an insect colliding with it, due to its capacity to deform via sacrificial links at the molecular level, within silk proteins themselves,” Gosselin said. “We were inspired by this property in our approach.”

The researchers used polycarbonate – which, when heated, becomes viscous like honey – to achieve their results. Using a 3D printer, Gosselin’s team harnessed this property to “weave” a series of fibres less than 2 mm thick, then repeated the process by printing a new series of fibres perpendicularly, moving fast, before the entire web solidified. The benefit of the process is that, as it’s slowly extruded by the 3D printer to form a fibre, the molten plastic creates circles that ultimately form a series of loops. “Once hardened, these loops turn into sacrificial links that give the fibre additional strength,” Gosselin said. “When impact occurs, those sacrificial links absorb energy and break to maintain the fibre’s overall integrity – similar to silk proteins.”

“Transparent materials with high impact absorption are required for many safety-critical engineering systems [and] existing transparent tough composites have increased impact resistance but often fail catastrophically because of poor impact absorption,” Gosselin and his colleagues wrote in a recent edition of Cell Reports Physical Science journal. “We propose a transparent impact-absorbing composite that reproduces the toughening mechanism involving sacrificial bonds and hidden lengths in spider silk.”

According to Gosselin, this nature-inspired innovation could lead to the manufacture of a new type of bullet-proof glass, or lead to the production of more durable plastic protective smartphones screens. “It could also be used in aeronautics as a protective coating for aircraft engines,” he added.