Strong and tough yet as light as a feather, the fibres are said to be ideally suited for technical components that are exposed to high loads. 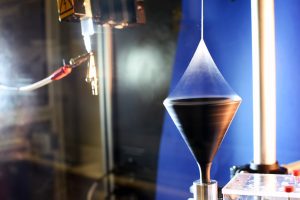 Unique new polymer fibres described as being both lightweight and extremely resilient, and developed by a researcher team led by scientists from the Martin Luther University (MLU) Halle-Wittenberg in Saxony-Anhalt, Germany, might make a big impact on the automotive industry and other sectors.

The MLU Research Group for Microstructure-Based Material Design at the Institute of Physics, led by Prof. Ralf Wehrspohn, used a device known as the ZEISS Xradia 810 Ultra – a high-resolution three-dimensional X-ray computed tomography which was able to characterize the fibres. The technology allows scientists to create highly detailed 3D images of small samples. When the researchers modeled the fibres, they saw for the first time that the fibrils within each individual fibre are almost always arranged in the same lengthwise direction.

The fibres, which are chemically based on polyacrylonitrile, are said to be remarkable for their extreme resilience and tensile strength while at the same time being extremely lightweight. One individual fibre with a diameter of around 0.04 mm comprises up to 4000 ultra-thin fibrils. The additive, or connecting molecule, joins the fibrils in the fibre together with favourable results, the researchers said. However, it’s not just the additive that’s responsible for making the material strong, but also the fact that it’s combined with the orientation of the many fibrils, which is a result of the stretching and heat treatment used during the manufacturing process. By way of comparison, an individual fibre is no thicker than a human hair and weighs less than a fruit fly but can nevertheless lift 30 grams in weight.

There are few synthetic materials that combine such high strength with extreme toughness, the team say. The scientists from Halle mastered these important technological challenges together with researchers from the University of Bayreuth, Jülich Research Center and other partners in Germany, China, and Switzerland. The polymer fibres they produced withstand deformation and fractures because they can stretch and then return to their original shape, meaning they can absorb lots of energy. “As well as being lightweight, the fibres are unique because it was difficult until now to combine high strength with high toughness in one material,” said Dr. Juliana Martins de Souza e Silva, Group Lead for the X-ray electron microscope at the MLU and a member of the research team.

Due to their unique properties, the fibres are said to be ideally suited to use in technical components subject to high loads, such as abrasion-resistant tires and other vehicle parts, helping to reduce the vehicle’s weight. They could be used as a material for parachutes and protective gear in the textile industry or for artificial tendons and ligaments, tissue repair materials or surgical sutures in medical engineering.

The scientists believe that the material could undergo further development. “Our fibres use an innovative design principle that would also allow similarly strong, tough fibres to be produced from other standard polymers,” said Martins de Souza e Silva. “Different combinations of polymers and linker molecules could therefore lead to the creation of new materials.”

For now, though, the polymer fibres discovered by the teams can be made straightforwardly using high-tech processes established in the sector. “We expect that our fibres will soon be put to practical use in industry,” Martins de Souza e Silva said.