TRONOPLAST TECHNOLOGIES has a mandate to innovate

As part of its mandate to devote serious resources to R&D, film extrusion technology supplier Tronoplast Technologies Inc. has relocated and expanded.

Untold numbers of hockey fans in Canada were severely irritated recently when the news broke that Las Vegas had been awarded an NHL expansion franchise. After all, it’s not like the American southwest – hardly a hotbed of hockey in the first place – didn’t have enough teams already thanks to Gary Bettmann’s famous sunbelt strategy. And in a similar vein, you might ask yourself why the Toronto area needs another plastic film equipment supplier, since it’s already home to a number of heavy hitters in the film extrusion technology business. 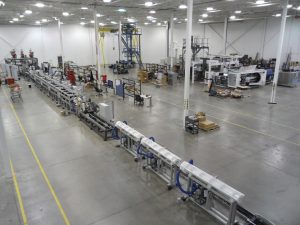 But in this latter case, it turns out there’s actually a very solid reason. When Tronoplast Technologies Inc. was founded in 2014 by blown film industry veteran Felix Guberman, it had a literal mandate for change. As a condition to receiving financial support from Silicon Valley, California-based private investment firm 3P Equity Partners, the company had to be innovative when it came to supplying polymer film extrusion equipment as well as turn-key solutions for the industry. “We received in excess of $5,000,000 to fund the expansion of our operational footprint and capabilities,” Guberman said. “The only condition attached to it by 3P was that we would spend a sizeable amount of time and money on commercially viable R&D.”

To further that end, the company recently moved from its original office in Toronto into a new headquarters in Brampton, Ont. that includes a 43,000-square-foot manufacturing facility. “Our first location only had small office and production space, which made it hard for us to focus on our main areas of R&D, which include developing systems that process PVC, including a planetary extruder that can shorten production time by allowing material to be mixed directly into machine; developing new approaches in annular film dies; and developing technologies for barrier shrink film applications,” Guberman said.

KNOWING WHEN NOT TO COMPETE

Tronoplast currently employs 16 workers, and Guberman touts its principals’ experience in blown and cast films as key to its thrust in complete film systems. “We are a machinery builder and engineering solution provider, and we have 300 suppliers locally and another 50 globally,” he said. “We don’t want to compete with someone who already knows how to make perfect dies, screws, and dosing systems.” And it’s here, Guberman believes, that Tronoplast has found its niche. “We’re surrounded by bigger players in the film making equipment industry, all of whom make very good equipment and have good reputations, so there’s no room for another company making another traditional three-layer blown film line,” he said. “We’re not interested in chasing after their customers – we want customers that are looking for an innovative, game-changing system supplier to help them do something new; a supplier that is lean and flexible enough to adapt quickly to their technical needs.” 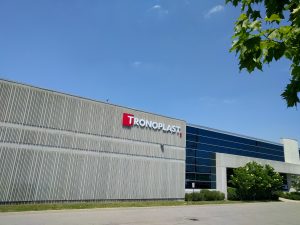 The view from outside the company’s new facility.

Tronoplast reported sales of $4.5 million in 2016, and sells internationally, including to the U.S., Russia, Italy, and other European countries. But it’s just the beginning of the company’s ambitions. “Our goal is to develop a $15-$20 million organization within the next three to five years,” Guberman said.

So in a region populated with film machinery Goliaths, Tronoplast is happy to play David, at least for the time being. “It’s unusual to see startup companies in our industry, but we, together with our investors, are convinced that the established suppliers in the GTA have come to the limits of their abilities to expand and innovate, which is where we see our opportunity,” Guberman said. “We know we have to prove ourselves, and we’re looking forward to doing it.”

But the Vegas Golden Knights still sounds like a lousy idea.