Does this Markham, Ont.-based custom injection molder draw strength from belonging to a global electronic manufacturing services company? You bet. But it owes its success to its own hard work and customer service.

A famous poem by British author Rudyard Kipling notes that “he travels the fastest who travels alone.” It’s sound advice for the traveller, perhaps, but when it comes to plastics processing it definitely helps to have a support system. Which Patrick Plastics Inc. has in spades.

The Ontario-based custom injection molder, part of the Season Group global electronic manufacturing services company, is in the midst of an impressive growth spurt: the firm has just expanded into a new manufacturing facility in Markham, purchased a moldmaking company and brought it in-house, plans to add up to four new injection molding presses, and is preparing to enter the thermoforming sector next year.

According to Patrick Plastics’ general manager Linda Young, the company’s success can be traced, at least in part, to its relationship with Season Group. “The various affiliates of Season Group all operate independently, but we also collaborate to provide a one-stop solution for all of our customers,” she said.

Patrick Plastics’ relationship to Season Group isn’t exactly mysterious: both businesses were founded by Chinese entrepreneur Patrick Hung. Hung is a Hong Kong native who emigrated to Canada in 1976 and promptly started Patrick Plastics, his own injection molding company, while at the same time keeping his business ties to China. One year before emigrating, Hung had opened a Hong Kong firm called Season Components Co. Inc., which made battery connectors before branching into injection molding. Fast forward 40 years and Season Group has grown into a 1,800-employee-strong vertically integrated corporation with facilities in Dongguan, China, Hong Kong, Malaysia, the U.S., Mexico, and the United Kingdom, as well as the Markham site. Season Group provides design, manufacturing, and aftermarket services to electronics OEMs and other industries. All of the corporation’s affiliates have at least ISO 9001 certifications and most carry TS 16949, AS 9100, and/or ISO 13485 certifications.

As Season Group’s only injection molding operation in North America, Patrick Plastics services some of the continent’s biggest parts consumers, especially in the automotive sector, where much of its custom work involves making parts for Tier 1 and Tier 2 manufacturers. The company has 16 injection molding machines ranging from 55 to 600 tons, with four new machines on order in smaller and larger tonnages. “The rest of our injection molding is for consumer goods, toys, and enclosures,” Young said. “We also manufacture our own Pro-Tech brand of carbon monoxide alarms that we sell directly to various U.S. government agencies for use in their facilities, and provide electromechanical systems assembly services.” 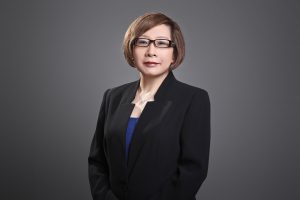 The firm was initially located in Toronto, moved to a 30,000-square-foot plant in Vaughan, Ont. in 1995, and moved into the new 60,000 square foot facility in Markham in October of this year – but not before buying its own moldmaking company. “The owner of our tooling supplier wanted to retire, so we acquired all of the company’s machines and workers in April 2016 and moved them with us to Markham,” Young said. “Ironically, the tooling we’re doing now is not primarily for us, but for other molders in the Toronto area.” 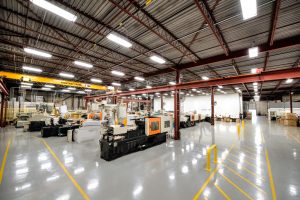 The new operation is located in a high technology region with good transportation infrastructure, Young said, and sits on a 4.3-acre site that offers room for further expansion. “The plant in Vaughan was simply too small and too limiting,” she said. “We needed extra capacity for anticipated growth over the next few years, since we have the necessary certifications – including recently achieving AS 9100 – to bolster our business in medical, auto, and aerospace markets.” To facilitate entry into this last sector, Patrick Plastics plans to establish a new thermoforming plastics division. “Having a thermoforming division is necessary to get into aerospace molding,” Young said. “Season Group has a thermoforming plant in Malaysia that is very successful, and it’s looking for us to become a second supplier to its customers in North America.” Patrick Plastics currently employs about 80 workers, Young added – a figure that she expects to rise with expansion.

BEST OF BOTH WORLDS

For Young and her colleagues at Patrick Plastics, the company’s move into a larger plant is proof that the manufacturing world is, in one important respect, getting smaller. “More and more, Tier 1 suppliers and other customers want one-stop providers, from part design to tool design to molding to post-mold assembly; it’s less hassle for them,” she said. “As a stand-alone company, our new facility allows Patrick Plastics to do it all in-house. At the same time, we’re linked with – and have access to – all of the global services that Season Group offers, so if we need assistance, it’s readily available. It’s the best of both worlds, and I believe it’s what the marketplace will soon be demanding from everyone.”

As Patrick Plastics demonstrates – and with apologies to Kipling – those plastics processors planning on moving the fastest in today’s globalized world definitely shouldn’t go it alone.