The new plastic is similar to nylon 6,6 in sturdiness but can degrade under any conditions with sunlight. 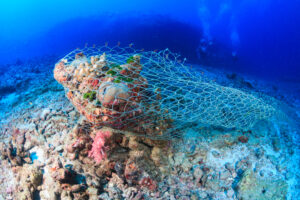 By contributing to about half of all floating plastic waste that ends up in the world’s oceans, lost or abandoned commercial fishing gear is a major hazard for marine environments. In a tragic process called “ghost fishing”, these nets, traps, and trawls – usually made of plastics like HDPE or nylon 6,6 – drift to coastal floors, ensnaring and killing fish and other marine life. And in the normal course, they can take hundreds of years to degrade.

To help lessen this ongoing problem, chemists at Cornell University, in Ithaca, N.Y., have developed a polymer called isotactic polypropylene oxide, or iPPO for short. iPPO is similar to nylon 6,6 in sturdiness and its ability to maintain stability under adverse conditions – however, unlike nylon 6,6, iPPO can degrade under any conditions with sunlight.

Developed over the past 15 years by Geoff Coates, the Tisch University Professor in the Department of Chemistry and Chemical Biology at Cornell, and his research team, iPPO was originally discovery was in 1949, but its mechanical strength and photodegradation were unknown before this recent work. According to team member Bryce Lipinski, a graduate research assistant and doctoral candidate in Coates’ laboratory, the high isotacticity (enchainment regularity) and polymer chain length of their material makes it distinct from its historic predecessor and provides its mechanical strength. “The rate of degradation is light intensity-dependent, but under their laboratory conditions the polymer chain lengths degraded to a quarter of their original length after 30 days of exposure,” Lipinski said.

Ultimately, the Cornell researchers want to leave no trace of the polymer in the environment. Lipinski notes there is literature precedent for the biodegradation of small chains of iPPO which could effectively make it disappear, but ongoing efforts aim to prove this.

“We have created a new plastic that has the mechanical properties required by commercial fishing gear,” Lipinski continued. “And if it eventually gets lost in the aquatic environment, this material can degrade on a realistic time scale. This material could reduce persistent plastic accumulation in the environment.”