Scientists discover first known bacterium that can feed on polyurethane

Researchers from the Helmholtz Centre for Environmental Research-UFZ in Germany have discovered a bacterium that shows potential for recycling polyurethane plastics, which are typically difficult to recycle. 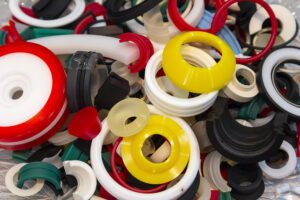 Polyurethane (PU) is one of the most widely used plastics in the world due to its lightweight and flexible properties…and also one of the hardest to recycle or destroy safely, since it’s a thermosetting polymer that doesn’t melt when heated. This means that it mostly ends up in landfill where it releases chemicals, some of which are carcinogenic.

Which is why it’s good news that German researchers are reporting the discovery of a new strain of bacteria that can not only survive in an environment polluted by PU, but can also use the plastic as food.

Called “Pseudomonas sp. TDA1,” the bacteria was discovered in a landfill site by researchers from Helmholtz Centre for Environmental Research-UFZ. Part of a group of bacteria that are well-known for their tolerance of toxic organic compounds and other forms of stress, this particular strain feeds on PU by degrading some of the material’s building blocks.

As reported in the journal Frontiers in Microbiology, the researchers fed PU to the bacterium in the lab and discovered that it’s capable of not only breaking down PU plastic but using the plastic as a source of food. The only catch is that the bacteria cannot completely break down PU foam without it first being partially broken down using chemicals.

While research into the use of microorganisms to break down traditional plastics has been going on for years, this marks the first time a solution has been discovered to help decompose PU. “The bacteria use these compounds as a sole source of carbon, nitrogen and energy,” said Dr. Hermann J. Heipieper, a senior scientist at the Helmholtz Centre. “This finding represents an important step in being able to reuse hard-to-recycle PU products.” But Heipieper said more research is needed and there’s “no immediate plan” to put the bacteria to work just yet.

Heipieper’s research is part of an EU programme called P4SB (From Plastic waste to Plastic value using Pseudomonas putida Synthetic Biology), which has been developed to find microorganisms that can bio-convert oil-based plastics into biodegradable ones.