PURGING: Turning up the heat on super-engineering resins

Expensive, high-temperature resins are almost the norm these days for some molders. But what shouldn’t be the norm is using standard commercial purging compounds to try to remove them from your processing machines. Here’s the right way to purge super-engineering resins. 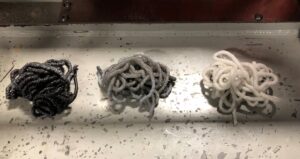 The Purge movie series has rapidly grown into one of the most popular and profitable horror franchises in Hollywood. For plastics processors using high-performance, high-heat engineering resins, the purge can be a horror show of a different kind. So-called “super-engineering” resins such as liquid-crystal polymers, PEEK, polyetherimide, polyphenylsulfone, and polysulfone generally process at melt temperatures in the range of 270° to 426°C, or 520° to 800°F.

Originally designed for aerospace, these increasingly popular materials can now be found in parts for the electrical/electronic, telecommunications, chemical, and medical industries. And they all share a common problem when it comes to purging: Traditional commercial purging compounds (CPCs) don’t have the necessary thermal stability to purge resins at these elevated temperatures, and will lose integrity and cleaning power, leaving behind residue — and maybe even catching fire. And because high-performance materials aren’t cheap — often costing four or five times as much as traditional resins — minimizing scrap is critical.

Which means that, like it or not, if you’re processing high-heat engineering resins, you can’t afford not to purge your injection molding machines, extruders, blow molding equipment, and hot runner systems. So since you have to do it, you might as well do it right, by using specialized CPCs that are designed for the job — that maintain thermal stability at very high processing temperatures — and by following the instructions that come with them. The good news is, most CPC makers and suppliers have at least one killer grade — and sometimes more — designed specifically for high-heat engineering resins, and depending on their preference, processors can choose between mechanical and chemical purge products.

Another mechanical CPC is ChemTrend L.P.’s Lusin Clean G410, which is formulated to operate from 300° to 415°C, or 570° to 780°F, and is compatible with PPO, PEEK, PPS, PSU, and LCP materials. “Lusin Clean G410 facilitates quick colour change using a minimal amount of material, reducing colour changeover time by up to 90 per cent and reducing scrap from 50 to 90 per cent,” said Corey Henley, Chem-Trend’s senior technical service specialist. Neutrex Inc., which has been manufacturing Purgex brand CPCs since 1992, offers Purgex 3057 Plus, a mechanical purge which includes a modified PE for higher temperature resins. “This CPC can be used for rapid turnaround on colour and material changes with challenging resins such as LCP, PBT, and PPO, on alloys such as PC/ABS, and is recommended for glass- or mineral-filled applications,” the company said. “This blend operates up to 315°C, or 600°F, with a five-minute soak or higher temperatures without a soak.”

From Shuman Plastics Inc./DynaPurge, Dyna-Purge E2 is a mechanical CPC that’s effective through the broad temperature range of 300° to 380°C, or 575° to 715°F. “The E2 compound is engineered for colour changes, resin changes, and preventative machine maintenance,” said Shuman Plastics president Ken Shuman. “It’s non-abrasive and thoroughly loosens carbonized and degraded resin, allowing it to be flushed away.”

On the chemical side, meanwhile, Slide Products Inc. offers Purge-Atory HT, which contains a PET resin carrier. “It’s especially well-suited for processors running PEEK or Ultem, and can be used to 370°C, or 700°F, and higher,” said Juan Grino, the company’s factory sales representative. “We’ve had customers use Purge-Atory HT to remove PEEK that processes at 480°C, or 900°F, which is blow torch temperature.”

Now that you know some of what’s available, the issue of how to use these specialized CPCs can be complex. We can start by getting rid of a common misperception: the assumption that processing at very high temperatures causes super-engineering resins to degrade more quickly. “That isn’t true,” said Ken Shuman. “Thermal stability is a key feature of high-performance plastics, so there isn’t any more degradation than with traditional resins operated at more traditional temperatures.” Which means that you don’t have to purge high-heat engineering resins more often than other applications, but there may be differences in how you purge these materials. And these operating procedures can vary. “It often comes down to a partnership between the customer and the CPC supplier to figure out how to get the purging compound through the machine as quickly and efficiently as possible,” Shuman said. “The goal is to purge without degrading the purge itself, which would just compound the problem. It’s a more nuanced procedure, and a good CPC supplier will work closely with the customer the first time to reach the right process, if possible by being there in-person to supervise.”

As Shuman and other experts agree, speed is definitely of the essence. “High-temperature CPCs shouldn’t reside in the machine for any longer than necessary due to the risk of decomposition,” Jarred Packard said. And when transitioning from high-heat to lower heat resins, the experts say, it’s helpful to bridge the temperature range by starting with purging compounds developed for high temperatures. “While the machine components are cooling, you may also need to flush and add a new barrel capacity, depending on the temperature and the time it takes to reduce heat for the next resin,” Packard said.

Other things can help to lower the risks. “Have adequate ventilation, adequate air movement, and purge into a bucket of water, which quickly encapsulates the purge, reducing the amount of smoke or off-gassing,” Ken Shuman said. Beyond these points, probably no two procedures will be exactly alike. Which just goes with the territory when purging high-temperature resins. “A difficulty in determining the right purging procedure with some of the newest high-temp materials is that the processors themselves sometimes don’t know what the chemical properties are,” Juan Grino said. “Many times it’s a unique, proprietary blend that’s been developed specifically for that processor, so we won’t have encountered it before and the customer might not be able to tell us exactly what’s in it. The only way we can figure out the right purging procedure in this situation is to experiment: go into the customer’s plant and burn some material until we get it right.”

NOT A DO-IT-YOURSELF PROJECT

But in today’s hyper-competitive thermoplastics molding market, taking the time to find the right purge procedure is a luxury not all can afford. “The tension in this equation is that most customers want to have a one-size-fits-all purging solution that works for every machinery line on their shop floor, and we can’t give that to them if even one of those lines is running a high-temperature material,” Ken Shuman said. “These are exotic materials and by definition require more exotic CPCs and very unique procedures.” Which might lead to the worst-case scenario: processors trying to remove high-heat resins with their own in-house compounds like soap and surfactants.

CPC suppliers are united in saying that this purging method — questionable at best even against softer materials — is a guaranteed fail against super-engineering resins like PEEK, which can be like cement once they cool. “The do-it-yourself approach puts your machines at risk for resin build-up, which can cause encapsulated materials to degrade and, eventually, may cause your machine to fail, which can lead to downtime,” Juan Grino said. “Using regrind is also a bad direction to go with high-temp resins because, since the melt temperature has been altered, you won’t know what temperature to run the regrind at.”

Like so much else in plastics processing, in the end it all comes down to economics. “Having to scrap components molded with very expensive high-temperature resins is obviously detrimental to your profitability,” said Jarred Packard. “And although CPCs made for high-temperature resins are more expensive than standard CPC grades, they’re actually much cheaper per kilogram than the high-temp materials themselves, whereas standard CPCs cost more per kilogram than the softer, more traditional resins they’re being used to remove.” Done the right way with the right CPCs, purging super-engineering resins from your processing machines won’t be a terrifying experience.