The single-piece can replaces a two-piece design which had many manufacturing steps. 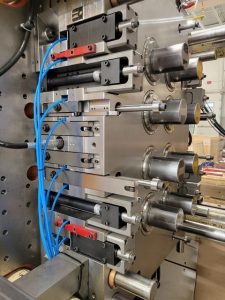 Canadian injection moldmaker StackTeck Systems Ltd. has delivered a new series of plastic can molds for Troy, Ala.-based KW Container with the use of a revised and improved five-piece collapsing core technology.

According to StackTeck, the new design features improvement of the core collapsing mechanism, allowing for the first-ever one-piece paint can molded using the company’s collapsing core technology including all water-cooled components.

“This single piece can replaces a two-piece design which had many manufacturing steps,” Darren Scholl, COO of KW Container, said. “The new approach simplifies production to a single step of molding, cutting down several steps in the way we used to produce these cans. By molding it all in one piece, we are producing a better part with reduced costs in floor space, energy, and there is a carbon footprint reduction. Because the process of bonding two parts has been eliminated, the overall production yield has improved as well.”

An added benefit of this new approach, StackTeck said, is that the plastic cans can be molded in one step in one injection machine, instead of having to be molded in two separate parts in two different machines.

The five-piece collapsing core is a technology that StackTeck offers to customers looking for plastic part design freedom in certain applications that require large undercuts with dramatic thin-walling capability and cycle time improvements, as compared to single piece core mold designs. “The wide range of sustainable benefits associated with this new method of manufacturing is a natural complement to [KW’s] environmentally friendly approach offering an entire product line made from recycled materials,” said Jordan Robertson, StackTeck’s vice president of business development and marketing.

StackTeck is headquartered in Brampton, Ont.