The Brampton, Ont.-based firm has also produced its first IML robot for a pail, which was configured for both a single cavity five-gallon pail as well as a 1×2 mold for five-litre pails. 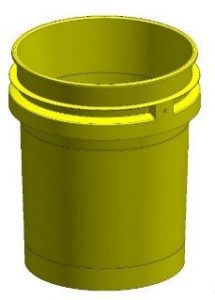 In addition, the company’s automation team has also produced its first IML robot for a pail, which was configured for both a single cavity five-gallon pail as well as a 1×2 mold for five-litre pails.

According to Jeff Ngai, StackTeck’s engineering director, the company incorporated its TRIM technology when molding pails, which reduces the weight of an industry standard five-gallon pail by 120 grams. “TRIM involves molding ultra-thin panels with flow leaders that assist with part filling and maintain part strength,” Ngai said. “This approach allows us to offer part weight savings that support a sustainable approach for injection molded pails in the market. The TRIMT panels on this pail have been reduced to 0.059 inches.”

StackTeck began this pail mold development project by benchmarking several different five-gallon pail molds with thick rim features that presented a cooling challenge. “Most of these reference parts typically run in the range of 17-18 seconds,” Ngai said. “For the standard pail design, two sets of collets were made using alternate materials H13 and KoolTrack steel alloy.”  With the H13 collets, a cycle time of 16.0 seconds was achieved, and with the KoolTrack collets there was a 1.8 second cycle time improvement and a final cycle time of 14.2 seconds for the standard pail. “In both cases, the ejection part temperature was measured by means of a thermal camera,” Ngai said.

According to StackTeck’s President and CEO, Vince Travaglini, “We’re very excited to be able to offer our customers a one stop solution for their pail needs,” said StackTeck president and CEO Vince Travaglini. “We’re committed to increasing our offerings that support sustainability and at the same time, we want to give our customers peace of mind, knowing that we are ready to deliver a fully integrated system as a complete IML molding solution.”