StackTeck Systems Ltd., a Brampton, Ont.-based manufacturer of multi-cavity, high-volume production molds, has unveiled what it says is a new approach to overmolding cube applications. 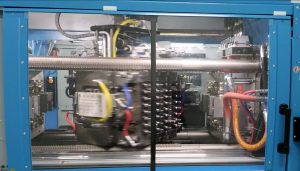 The cube mold as it rotates in the machine. Photo Credit: StackTeck Systems Ltd.

According to Rick Unterlander, StackTeck’s general manager of PET, the technology is distinct from traditional co-injection, because an inner layer is initially molded on one side of the cube, then rotated 180 degrees where the outer layer is over-molded. “Both molding stages operate as conventional injection molding processes, which is simpler to set up, maintain, and run continuously in comparison to a more complex co-injection system,” he said. “It’s comprised of two standard molds, with stacks designed to accurately and repeatably produce the individual layers of the preform.”

Instead of the light barrier approach, this technology can be used with significant rPET content in the overmolded shot, Unterlander continued – for some applications, up to 75 per cent of the total part weight can be molded with rPET on the outside surface, which is much higher than some competing preform molding processes.

According to StackTeck, PET preform overmolding allows cost reduction through isolation of non-virgin materials from product contents – regrind/flake, use of lower cost materials, and reduced additive/colourant content; increased use of recycled material/rPET, which addresses environmental concerns and/or government regulations; the development of new approaches to applications requiring light barrier/shielding such as dairy; and new product differentiation.