The award, presented during the K trade show in October, recognizes a 20-year development partnership in injection molding machines. 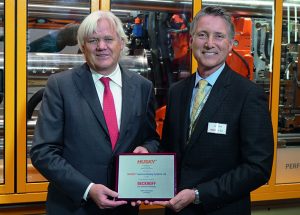 The award was presented at the K 2019 trade show held in Düsseldorf, Germany, in October.

“When Husky chose Beckhoff as its control systems supplier in 1999, the…company was ready to step off the beaten path and work with a pioneer in the area of PC-based control technology,” Bolton, Ont.-based husky said in a Dec. 11 statement. “Beckhoff was still a relatively young and small company at the time…[but] during the development phase it quickly became apparent that Beckhoff…was the perfect match for Husky as the technology leader in high-performance injection molding machines. Husky’s technical challenges subsequently led to technological improvements and the development of new Beckhoff products.”

An example of the cooperation between Husky and Beckhoff is the advanced temperature sensor modules, Husky said, which can be mounted directly on the injection molding machine without any special cables.

After what it calls “a successful trial phase”, Husky went into series production with Beckhoff control systems and declared them the standard for its entire machine portfolio. In 20 years of continuous cooperation, various generations of PC-based control systems have been installed in Husky machines as a result. Husky was also one of the first companies to rely on the fast EtherCAT standard introduced to the market by Beckhoff in 2003. “With EtherCAT, Husky’s machines not only became faster, but also more accurate, which in turn increased their performance and quality while making them more resource-efficient,” the statement said. “The technical and economic success of both companies went hand-in-hand with these developments.”