The automaker is working on several new battery chemistries, including solid state, which have solid conducting material instead of the liquid electrolyte. 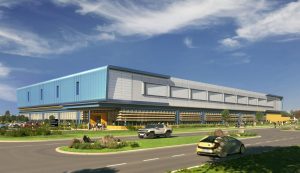 General Motors says it’s building a huge new electric vehicle battery lab in Michigan where scientists will work on chemistry to cut costs 60 per cent over current vehicles and allow people to travel 500 to 600 miles (800 to 965 kilometers) per charge.

The Wallace Center will be located on the campus of GM’s Global Technical Center in the Detroit suburb of Warren. Currently under construction, the 300,000-square-foot building is scheduled to be completed in mid-2022. “Designed for expansion, the facility is projected to grow up to at least three times its initial footprint, with room for additional investments, as demand for EVs increases,” GM officials said.

The facility is expected to build its first prototype cells in the fourth quarter of 2022.

“The Wallace Center will significantly ramp up development and production of our next-generation Ultium batteries and our ability to bring next-generation EV batteries to market,” said Doug Parks, GM executive vice president, global product development, purchasing and supply chain. “The addition of the Wallace Center is a massive expansion of our battery development operations and will be a key part of our plan to build cells that will be the basis of more affordable EVs with longer range in the future.”

When completed, the Wallace facility will connect GM’s network of battery development sites located on its global technical centre campus – these sites include GM’s research and development chemical and materials’ subsystems lab that currently leads the company’s battery development, including its pioneering work on lithium-metal anodes; and the Estes battery systems lab, said to be the largest battery validation lab in North America at more than 100,000 square feet.